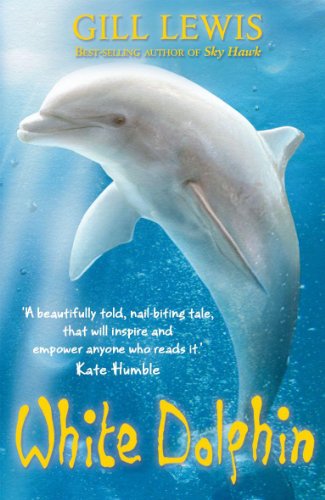 In Stock
£3.99
Frustrated at school and haunted by her mother's disappearance, Kara only feels truly alive when she is sailing the ocean's waves. But when she and Felix make a startling discovery on the beach, it sets in motion a dramatic chain of events. And soon they must make an impossible choice. Risk their own lives or face losing everything . . .
Very Good
9 in stock

'The white dolphin is a sign that Mum's out there . . .' When they first meet, Kara and Felix can't stand each other. But on discovering an injured dolphin calf on the beach they know they must work together to save it. Now friends, they set out to find the truth behind the disappearance of Kara's mother, and to protect the nearby reef. But powerful people don't want them to succeed. And with the odds stacked against them, how can Kara and Felix make their voices heard?

"One of my favourite books of the year, now in paperback. A beautiful, uplifting animal adventure from the author of Sky Hawk." * The Bookseller, Fiona Noble *
"Packs a powerful emotional message into an exciting plot." * The Daily Mail *
"Get ready for an ocean adventure in this exciting book by Gill Lewis-White Dolphin!" * National Geographic Kids *
Listed on The Sunday Times' 100 Best Children's Books from the last 10 years

Gill Lewis spent much of her childhood in the garden where she ran a small zoo and a veterinary hospital for creepy-crawlies, mice, and birds. When she grew up she became a real vet and travelled from the Arctic to Africa in search of interesting animals and places. She worked in Cornwall for several years and spent many hours of her spare time in the cold Atlantic, learning how to fall off a surf board. Gill now writes books for children. Her debut novel, Sky Hawk was published to much critical acclaim and has been translated into twenty languages. The publishers of Sky Hawk generously sponsored a satellite-tagged osprey through the Highland Foundation for Wildlife, fulfilling Gill's dream that her writing could contribute directly to wildlife conservation. She lives in the depths of Somerset with her husband and three children and writes from a tree house in the company of squirrels.

GOR004676068
White Dolphin by Gill Lewis
Gill Lewis
Used - Very Good
Paperback
Oxford University Press
2013-01-03
288
0192756214
9780192756213
N/A
Book picture is for illustrative purposes only, actual binding, cover or edition may vary.
This is a used book - there is no escaping the fact it has been read by someone else and it will show signs of wear and previous use. Overall we expect it to be in very good condition, but if you are not entirely satisfied please get in touch with us.