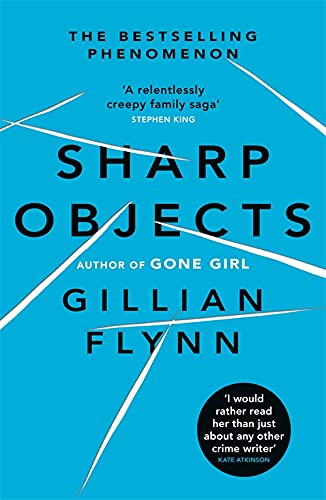 In Stock
£3.59
Some scars never heal . . . An addictive thriller from the author of the mega bestseller GONE GIRL.
Like New Very Good Good Well Read
Only 1 left

Some scars never heal . . . An addictive thriller from the author of the mega bestseller GONE GIRL.

When two girls are abducted and killed in Missouri, journalist Camille Preaker is sent back to her home town to report on the crimes.

Long-haunted by a childhood tragedy and estranged from her mother for years, Camille suddenly finds herself installed once again in her family's mansion, reacquainting herself with her distant mother and the half-sister she barely knows - a precocious 13-year-old who holds a disquieting grip on the town.

As Camille works to uncover the truth about these violent crimes, she finds herself identifying with the young victims - a bit too strongly. Clues keep leading to dead ends, forcing Camille to unravel the psychological puzzle of her own past to get at the story. Dogged by her own demons, Camille will have to confront what happened to her years before if she wants to survive this homecoming.

To say this is a terrific debut novel is really too mild ... [it is] a relentlessly creepy family saga. I found myself dreading the last thirty pages or so, but was helpless to stop turning them. Then, after the lights were out, the story just stayed there in my head, coiled and hissing, like a snake in a cave * Stephen King *
This is a stylish thriller about housewives who don't recognise their own desperations, while the reader recognises with fascinated clarity the nastiness and vacuity of life in an updated Stepford * Literary Review *
It is a stunningly accomplished evocation of the oppressiveness of small-town life and is just as assured in depicting the gradually revealed psychological disorder that links Camille to both the killer and victims * Sunday Times *
Compulsively disturbing and ... exciting * Time Out *
[A] striking first novel ... a relentlessly dark tale, with some very disturbing characters, Camille among then, and it makes a powerful impact * Sunday Telegraph *
A stylish and compelling debut. A real winner * Harlan Coben *
If you love Martha O'Connor look out for Gillian Flynn's debut, Sharp Objects ... a gothic fairytale-gone-bad * Company *
The horror creeps up slowly, with Flynn misdirecting the reader until the shocking, dreadful and memorable double ending * Publisher's Weekly *
Six years before she became famous for Gone Girl, Gillian Flynn's first book wowed the critics.. it's a dark, unsettling read that fills you with doubt and keeps you second-guessing the whole way through" * ESSENTIALS *

GOR006846374
Sharp Objects: A major HBO & Sky Atlantic Limited Series starring Amy Adams, from the director of BIG LITTLE LIES, Jean-Marc Vallee by Gillian Flynn
Gillian Flynn
Used - Like New
Paperback
Orion Publishing Co
2007-09-17
336
0753822210
9780753822210
Short-listed for CWA Duncan Lawrie Dagger 2007
Book picture is for illustrative purposes only, actual binding, cover or edition may vary.
The book has been read, but looks new. The book cover has no visible wear, and the dust jacket is included if applicable. No missing or damaged pages, no tears, possible very minimal creasing, no underlining or highlighting of text, and no writing in the margins.