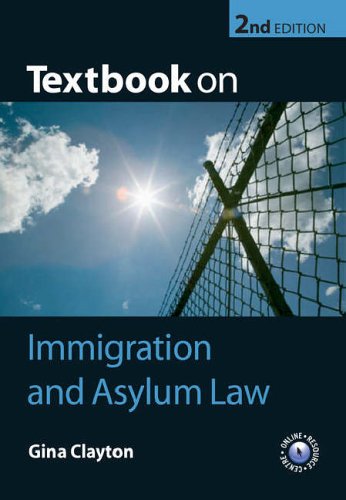 Textbook on Immigration and Asylum Law
by Gina Clayton

In Stock
£5.99
Provides undergraduates with an analysis of the law and system of control which govern immigration and asylum in the UK. This book introduces students to the subject through its historical and legal context, clarifying who is subject to immigration control, and describing the legal and administrative structure of the system.
Very Good Well Read
Only 1 left

Textbook on Immigration and Asylum Law by Gina Clayton

This second edition of Gina Clayton's textbook provides undegraduates with a dynamic analysis of the law and system of control which govern immigration and asylum in the UK. Students are introduced to the subject through its historical and legal context, clarifying who is subject to immigration control, and describing the legal and administrative structure of the system. A chapter is devoted to the impact of human rights on immigration law, and this theme is pursued throughout the book. Key topics covered on immigration and asylum law courses are covered in detail. These include entry for work, including the development of the concept of managed migration, entry for study and family settlement (with a separate chapter on rights under European law). Three chapters deal with asylum claims in the UK, exploring the requirements for establishing a claim, the provisions by which a claim may be limited or denied, and in a new chapter, the increasingly important connection between the asylum process and the rights of the asylum seeker. The trend towards criminalization of migrants is also discussed. Detention, deportation and removal are fully examined as both legal powers and tools of policy in a wider field. Reference to themes such as executive discretion and the dominance of recent law-making by a policy of asylum deterrence are featured throughout the book illustrating the vital relationship between immigration law and its social and political context. Each chapter includes detailed analysis of case law and primary and secondary legislation enabling the reader to develop a thorough understanding of what is often seen as a complex area of law. Online Resource Centre The book is supplemented by an Online Resource Centre which provides annotated web links, problem questions and updates on recent and important case law or legislation. It is updated twice yearly to assist students in an area of law that is continually changing and is closely cross-referenced with the book.

"This is the sequel to the Textbook first published in 2004 and acclaimed for its breadth and depth and its remarkable readability...Not only is this an impeccably conscientious publication, it is the only publication of its kind in this field because earlier textbooks have not been updated."EIN Headleins, September 2006 "This is the textbook that has been waiting to be written on immigration/ asylum law and it is a very welcome tool for the teaching and studying of immigration law." Immigration, Asylum and Nationality Law, 2005 - on the first edition "The mass of legal material is made easier to digest as she lightly dusts it in social and political context, thus linking the student audience to the public 'immigration debate'." Times Education Supplement, 2006 - on the first edition

Gina Clayton is a Senior Lecturer in Law at the University of Huddersfield.

GOR001155318
Textbook on Immigration and Asylum Law by Gina Clayton
Gina Clayton
Used - Very Good
Paperback
Oxford University Press
2006-08-03
664
0199289735
9780199289738
N/A
Book picture is for illustrative purposes only, actual binding, cover or edition may vary.
This is a used book - there is no escaping the fact it has been read by someone else and it will show signs of wear and previous use. Overall we expect it to be in very good condition, but if you are not entirely satisfied please get in touch with us.