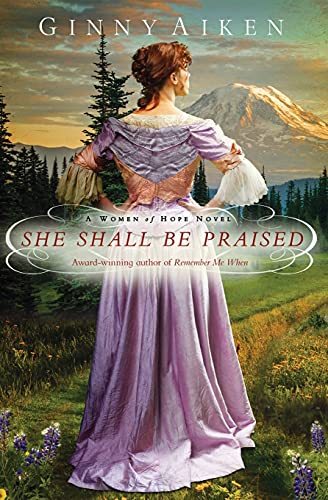 She Shall Be Praised
by Ginny Aiken

In Stock
£2.99
Faith, humor, romance, and adventure blend in the third novel in Ginny Aiken's historical series, inspired by The Perfect Wife in Proverbs 31.
Good
Only 1 left

She Shall Be Praised Summary

She Shall Be Praised by Ginny Aiken

When socialite Emma Crowell stops the carriage on the way to Portland to 'exercise' her fussy poodle, she does not expect to become stranded in the woods in decidedly unsuitable attire. The pair of men who find her decide to take her back to their cave, where they've hidden sheep they rustled from a nearby rancher. The rancher turns out to be Peter Lowery, and he arrives, furious, to retrieve his property. But when he discovers Emma, he does the Christian thing and brings her, her dog, and the thieves back to his cabin. Peter may have to shelter the motley group, but he expects them to earn their keep until he can take them to Bountiful, the nearest town. Emma suddenly finds herself in charge of the house and the care of Peter's imaginative young son Robby. She's surprised to find that she enjoys the challenges of life at the cabin, and feels drawn to Peter. But though willing to learn, no matter how she tries, she can never seem to live up to expectations. As she seeks God's guidance, she faces the picture of womanhood shown by the lady in the 31st chapter of Proverbs. Between that picture and the one of Peter's late wife, Emma must decide who she has been, who she is, and who she really wants to be. What is to be her worth as a woman? What is to be her legacy?

She Shall Be Praised Reviews

"Ginny Aiken is a captivating storyteller who offers her readers a delightful journey they won't soon forget."--Debra White Smith, author of "The Seven Sisters" series

Ginny Aiken, a former newspaper reporter, lives in Indiana and frequently travels to Pennsylvania with her engineer husband. Born in Havana, Cuba, raised in Valencia and Caracas, Venezuela, she discovered books early and wrote her first novel at age fifteen while she trained with the Venezuelan Classical Ballet Company. She burned that tome when she turned a 'mature' sixteen. Ginny has taught novel-writing seminars and workshops at Harrisburg (PA) Area Community College and Penn State University.

GOR008639796
She Shall Be Praised by Ginny Aiken
Ginny Aiken
Women of Hope
Used - Good
Paperback
Time Warner Trade Publishing
2014-01-07
400
089296846X
9780892968466
N/A
Book picture is for illustrative purposes only, actual binding, cover or edition may vary.
This is a used book - there is no escaping the fact it has been read by someone else and it will show signs of wear and previous use. Overall we expect it to be in very good condition, but if you are not entirely satisfied please get in touch with us.