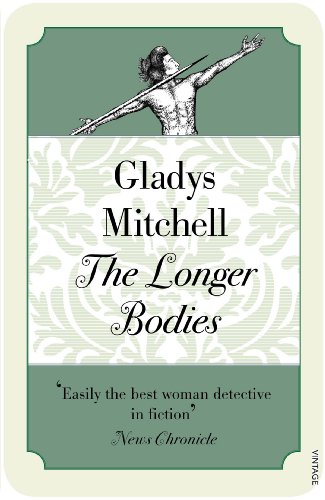 The Longer Bodies
by Gladys Mitchell

In Stock
£6.99
A VINTAGE MURDER MYSTERYRediscover Gladys Mitchell - one of the 'Big Three' female crime fiction writers alongside Agatha Christie and Dorothy L. The police are baffled, but fortunately Mrs Bradley, an unusual psychoanalyst with a flair for sleuthing, has begun to take an keen interest in the Puddequet Olympics.
Very Good
Only 1 left

The Longer Bodies by Gladys Mitchell

A VINTAGE MURDER MYSTERY Rediscover Gladys Mitchell - one of the 'Big Three' female crime fiction writers alongside Agatha Christie and Dorothy L. Sayers. Great Aunt Puddequet was reputed to be enormously wealthy. It was also a tradition in the family that she was extraordinarily mean. So when the malicious old bird summons her grand-nephews to perform in a games tournament in order to secure their inheritances, they gloomily oblige. Before long, the country house games are interrupted by murder. The police are baffled, but fortunately Mrs Bradley, an unusual psychoanalyst with a flair for sleuthing, has begun to take an keen interest in the Puddequet Olympics. Opinionated, unconventional, unafraid... If you like Poirot and Miss Marple, you'll love Mrs Bradley.

"There are many other good detective writers...there is Gladys Mitchell with her fascinating Mrs Bradley, ugly as a toad and armed with the latest up-to-date theories of psychology" -- Agatha Christie * Guardian *
"Among the most revered names in British mystery fiction" * Washington Post *
"Mrs. Bradley and her dapper chauffeur, George, drive about the countryside in a midnight-blue Rolls-Royce with full bar, and wherever they go, they find murder" * New York Times *
"Easily the best woman detective in fiction" * News Chronicle *
"Filled with marvellously memorable characters... Sure to delight any fans of Agatha Christie and Dorothy L. Sayers" -- Kirsty Hewitt * Nudge *

Gladys Maude Winifred Mitchell - or `The Great Gladys' as Philip Larkin called her - was born in 1901, in Cowley in Oxfordshire. She graduated in history from University College London and in 1921 began her long career as a teacher. Her hobbies included architecture and writing poetry. She studied the works of Sigmund Freud and her interest in witchcraft was encouraged by her friend, the detective novelist Helen Simpson. Her first novel, Speedy Death, was published in 1929 and introduced readers to Beatrice Adela Lestrange Bradley, the detective heroine of a further sixty six crime novels. She wrote at least one novel a year throughout her career and was an early member of the Detection Club, alongside Agatha Christie, G.K Chesterton and Dorothy Sayers.In 1961 she retired from teaching and, from her home in Dorset, continued to write, receiving the Crime Writers' Association Silver Dagger in 1976. Gladys Mitchell died in 1983.

GOR005555763
The Longer Bodies by Gladys Mitchell
Gladys Mitchell
Used - Very Good
Paperback
Vintage Publishing
2014-04-15
336
0099582252
9780099582250
N/A
Book picture is for illustrative purposes only, actual binding, cover or edition may vary.
This is a used book - there is no escaping the fact it has been read by someone else and it will show signs of wear and previous use. Overall we expect it to be in very good condition, but if you are not entirely satisfied please get in touch with us.