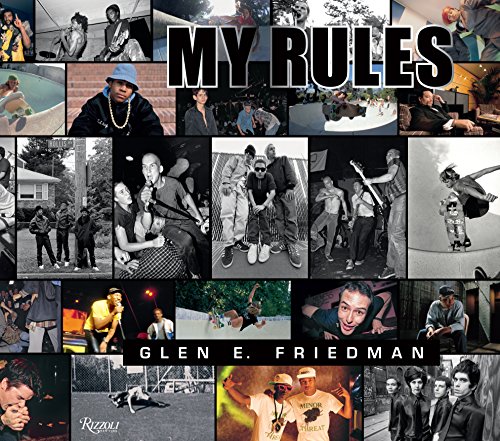 The definitive monograph of Glen E. Friedman, a pioneer of skate, punk, and hip-hop photography, including much never-before-published work.

The definitive monograph of Glen E. Friedman, a pioneer of skate, punk, and hip-hop photography, including much never-before-published work. Glen E. Friedman is best known for his work capturing and promoting rebellion in his portraits of artists such as Fugazi, Black Flag, Ice-T, Dead Kennedys, Minor Threat, The Misfits, Bad Brains, Beastie Boys, Run-D.M.C., and Public Enemy, as well as classic skateboarding originators such as Tony Alva, Jay Adams, Alan Ollie Gelfand, Duane Peters, and Stacy Peralta, and a very young Tony Hawk. Designed in association with celebrated street and graphic artist Shepard Fairey, this monograph captures the most important and influential underground heroes of skateboarding, punk, and hip-hop cultures. My Rules is an unprecedented window into the three most significant countercultures of the last quarter of the twentieth century, and Friedman's photographs define those important movements that he helped shape. A remarkable chronicle and a primer about the origins of radical street cultures, My Rules is also a statement of artistic inspiration for those influenced by these countercultures.
Glen E. Friedman has shot some of the most iconic skateboarding, punk rock and hip-hop images you've ever seen. . . . [his] in-your-face imagery spotlights the unmistakable vitality inherent across all three subcultures, making him a veritable Weegee of the early skate, punk and hip hop scenes. The NYC-based photographer's best-known book is the indispensable Fuck You Heroes, but his latest, My Rules, is just as compelling. -Maxim Magazine

Friedman's latest book My Rules...was nothing short of amazing. This is literally a book that every skateboarder, musician and cultural enthusiast must get their hands on. It is more than worth it. -Juice Magazine

I don't normally write posts and say you must own this! but... you've gotta get this! Glen E. Friedman's new My Rules (Rizzoli) is simply stunning. A real masterpiece! It was a very pleasant-and unexpected-surprise indeed. The book is a glorious MONSTER, with huge color photographs and amazing B&W images. Glen's work splendidly captures historic moments in time. -DangerousMinds.net

My Rules is the new book from Glen E. Friedman with the best of his early skate, punk, and hip-hop photography along with essays by the key players in each movement. -The Skateboard Mag

My Rules, the 324-page tome has over 350 photographs and illustrations, and comes with contributing essays by such culture heavyweights as the visual artist Shepard Fairey, Chuck D. of the Public Enemy...The book is a pretty comprehensive source of Friedman's here-and-now style of photography. Many photos of skaters mid-stride and bands mid-riff could not have been taken otherwise. Whether skate, punk, or hip-hop, Friedman photographed those who rebelled against the society that did not accept them in the first place. That some of them went on to influence popular culture and made it to the top of that very same society still seems somewhat strange. Whether Friedman is right or wrong is up for debate. But his photos, as a testament to the cultural energy in American streets in the late 20th Century, are not. -StyleZeitgeist Magazine

Weighing in at seven pounds and featuring 100 never-before-published photos as well as essays from Rick Rubin, Shepard Fairey, Ad-Rock, Henry Rollins, and many more, My Rules is a stunning, 324-page time capsule of counterculture's most revealing moments, serving as a bible for youth in revolt looking for honest inspiration. -Fader Magazine

Glen Friedman has taken so many photos of so many things I that I love that his work sort of makes me annoyed and angry. The original My Rules photo zine came out in 1982, and this new books collects all the photos I love (skateboarding, hip-hop, punk rock, Public Enemy wearing Minor Threat shirts). It is a monster that should dominate all coffee tables this year, man -Artforum

The Man Behind the Most Iconic Portraits of Skaters, Punks, and Rappers. The best of these portraits has been compiled in a new photo anthology called My Rules. At the time, Friedman says he was just making pictures of what inspired him. He had no idea he was creating an important historical record of some of the era's most influential musicians. -Wired

...represents some 30 years and 7 pounds of gorgeous hardcore, hiphop, and skateboarding history. -Boingboing.net

It's seems an insult that the work of photographer Glen E. Friedman isn't more well known. The style of image he pioneered - a wide-eyed and wide-angled directness, at once natural and posed - is taken for granted in our popular culture, which has boldly ripped him off with very little credit. My Rules is a trip down memory lane, collecting many of Friedman's most memorable images throughout his life, bridging the countercultures of punk/hip-hop and skateboarding, fused by their confrontational styles. Interspersed between the clusters of images are recollections from some of Friedman's collaborators and subjects, including rapper Chuck D of Public Enemy, former Black Flag singer Henry Rollins, and the artist Shepard Fairey, who collaborated on the design of the book with Friedman. -Artinfo

Glen E. Friedman has spent the last 40 years creating the iconic images often associated with skateboarding, punk rock and hip hop and his new book, My Rules, brings an incredible collection of photographs from his archive together in one massive seven-pound tome. Friedman spoke to American Photo about combing through his archives, capturing counterculture movements and the never-before-seen gems that initially slipped through the cracks. -American Photo

My Rules isn't Friedman's debut, but rather an expansion on his early documentation on the subcultures that have punched the mainstream in the jaw so many times that they've tapped out and tried to cash in on them instead. -ESPN
Glen E. Friedman's work has appeared in countless publications and exhibitions and is part of permanent collections, including those at the Metropolitan Museum of Art in New York and the Smithsonian Institution, Washington, D.C., among others. Shepard Fairey is a graphic designer. C. R. Stecyk III is the founder of Juxtapoz magazine. Henry Rollins is a musician and writer. Chuck D is a rap artist and activist. Tony Alva is a world-renowned skateboarder. Ian Mackaye is a musician and record label owner. Rick Rubin is an award-winning record producer. Adam Horovitz is a musician.
NGR9780847843558
9780847843558
0847843556
Glen E. Friedman: My Rules by Glen E. Friedman
Glen E. Friedman
New
Hardback
Rizzoli International Publications
20140916
324
null null null null null null null null null null
Book picture is for illustrative purposes only, actual binding, cover or edition may vary.
This is a new book - be the first to read this copy. With untouched pages and a perfect binding, your brand new copy is ready to be opened for the first time
Trustpilot