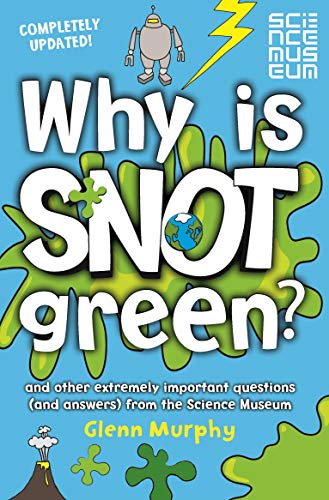 Why is Snot Green? by Glenn Murphy

A fun, doodle-filled reworking of Why is Snot Green? by the acclaimed Glenn Murphy!

Why is Snot Green?: And other extremely important questions (and answers) from the Science Museum by Glenn Murphy

Why is snot green? Do rabbits fart? What is space made of? Where does all the water go at low tide? Can animals talk? What are scabs for? Will computers ever be cleverer than people? Discover the answers to these and an awful lot of other brilliant questions frequently asked at the Science Museum in this wonderfully funny and informative book.

Divided into five sections, which cover everything from the Big Bang to bodily functions and cool gadgets:

Packed with doodles and information about all sorts of incredible things, and published in association with the Science Museum, this book contains absolutely no boring bits!

Glenn Murphy wrote his first book, Why Is Snot Green?, while working at the Science Museum, London. Since then he has written around twenty popular-science titles aimed at kids and teens, including the bestselling How Loud Can You Burp? and Space: The Whole Whizz-Bang Story. His books are read by brainy children, parents and teachers worldwide, and have been translated into Dutch, German, Spanish, Turkish, Finnish, Chinese, Japanese, Korean and Indonesian. Which is kind of awesome. In 2007 he moved to the United States and began writing full-time, which explains why he now says things like 'kind of awesome'.
These days he lives in sunny, leafy North Carolina - with his wife Heather, his son Sean, and two unfeasibly large felines.

GOR006572921
9781447273028
1447273028
Why is Snot Green?: And other extremely important questions (and answers) from the Science Museum by Glenn Murphy
Glenn Murphy
Used - Very Good
Paperback
Pan Macmillan
2014-09-11
304
Short-listed for Royal Society Young People's Book Prize 2008 (UK)
Book picture is for illustrative purposes only, actual binding, cover or edition may vary.
This is a used book - there is no escaping the fact it has been read by someone else and it will show signs of wear and previous use. Overall we expect it to be in very good condition, but if you are not entirely satisfied please get in touch with us
Trustpilot