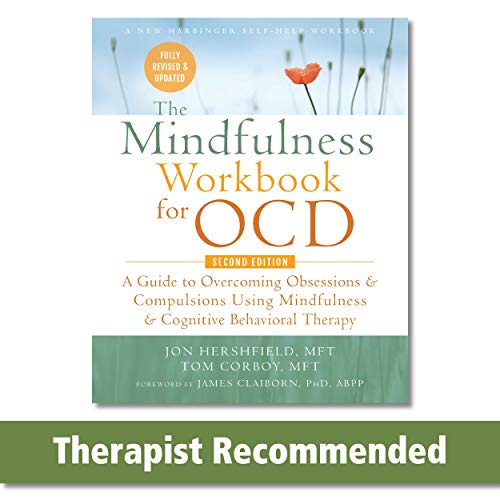 The Mindfulness Workbook for OCD by Glenn R Schiraldi, PhD

The Mindfulness Workbook for OCD: A Guide to Overcoming Obsessions and Compulsions Using Mindfulness and Cognitive Behavioral Therapy by Glenn R Schiraldi, PhD

If you have obsessive-compulsive disorder (OCD), you might have an irrational fear of being contaminated by germs, or obsessively double-check things. You may even feel like a prisoner, trapped with your intrusive thoughts. And while OCD can have a devastating impact on your life, getting real help can be a challenge.Combining mindfulness practices with cognitive-behavioral therapy (CBT), The Mindfulness Workbook for OCD offers practical and accessible tools for managing the unwanted thoughts and compulsive urges that are associated with OCD. With this workbook, you will develop present-moment awareness, learn to challenge your own distorted thinking, and stop treating thoughts as threats and feelings as facts.This fully revised and updated second edition also includes new meditations, information, and chapters on emotional and mental contamination, existential obsessions, false memories, and more.If you're ready to take back your life back from OCD-and start living with more joy in the moment-this workbook has everything you need to get started right away.

Jon Hershfield, MFT, is director of The Center for OCD and Anxiety at Sheppard Pratt in Towson, MD. He specializes in the use of mindfulness and cognitive behavioral therapy (CBT) for obsessive-compulsive disorder (OCD) and related disorders. He is author of Overcoming Harm OCD, When a Family Member Has OCD, and The OCD Workbook for Teens, and coauthor of Everyday Mindfulness for OCD.

Tom Corboy, MFT, is executive director of the OCD Center of Los Angeles, which he founded in 1999. He is a licensed psychotherapist specializing in MBCBT for the treatment of OCD and related anxiety-based conditions. In addition to his work with individual clients, he has trained and mentored many postgraduate interns, has presented at numerous conferences held by the International OCD Foundation (IOCDF), and has facilitated weekly therapy groups for adults with OCD since 1997. You can find out more about him at www.ocdla.com.

Foreword writer James Claiborn, PhD, ABPP, is a psychologist in private practice specializing in OCD and related disorders. He is a member of the Scientific Advisory Board of the International OCD Foundation and has presented internationally on OCD, cognitive behavioral therapy (CBT), and other topics.

NGR9781684035632
9781684035632
1684035635
The Mindfulness Workbook for OCD: A Guide to Overcoming Obsessions and Compulsions Using Mindfulness and Cognitive Behavioral Therapy by Glenn R Schiraldi, PhD
Glenn R Schiraldi, PhD
New
Paperback
New Harbinger Publications
2021-02-01
232
N/A
Book picture is for illustrative purposes only, actual binding, cover or edition may vary.
This is a new book - be the first to read this copy. With untouched pages and a perfect binding, your brand new copy is ready to be opened for the first time
Trustpilot