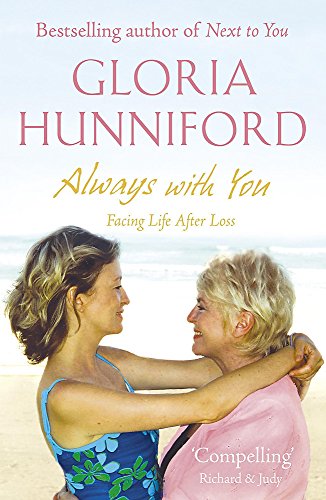 Always with You
by Gloria Hunniford

In Stock
£3.99
With the courage and unflinching honesty that characterised bestselling NEXT TO YOU, Gloria Hunniford shares the insight, experience and hope of the journey of grief she has been on since losing her daughter Caron.
Very Good
6 in stock

Always with You Summary

Always with You by Gloria Hunniford

On April 13th 2004, Gloria Hunniford's 41 year old daughter, Caron Keating, died after a secret seven year battle with cancer. The world that had changed with Caron's diagnosis, now shattered. Life had been cruelly interrupted, a black hole opened in Gloria's heart, she was consumed with the unimaginable grief that the loss of a child brings and she was alone. Or so she felt.
Within days of Caron's death letters started to arrive. People who had lost their children felt compelled to write. Strangers understood what she was going through often more than the family and friends standing next to her. There were many, many dark days but the letters kept coming and somehow she managed to do the impossible. Wake up everyday, get out of bed, breath.
The black hole is still there, sometimes as big as ever, but she has found a way to live with it, around it. This is the story of how Gloria and her family survived Caron's death, but it is not only her story. It is written for those who held her while she raged. It is written for all those people who helped her through that first terrible year by writing, but mostly it is written for the many thousands who didnt. Grief is lonely, but as this book shows, you are not alone. Death affects us all at some point. Gloria will never again be the carefree woman she once was, the loss of a loved one is always with you, but so are the living This is how she found her way back to them.

Gloria Hunniford was the first woman to have her own daily show on BBC Radio 2 and went on to present Holiday, Songs of Praise and most recently The Heaven and Earth Show. Her daughter Caron Keating died of breast cancer in 2004. Gloria set up the Caron Keating Foundation to raise money for people affected by cancer. She lives with her second husband Stephen in Sevenoaks, Kent.

GOR001105926
Always with You by Gloria Hunniford
Gloria Hunniford
Used - Very Good
Paperback
Hodder & Stoughton General Division
2009-04-30
320
0340953977
9780340953976
N/A
Book picture is for illustrative purposes only, actual binding, cover or edition may vary.
This is a used book - there is no escaping the fact it has been read by someone else and it will show signs of wear and previous use. Overall we expect it to be in very good condition, but if you are not entirely satisfied please get in touch with us.