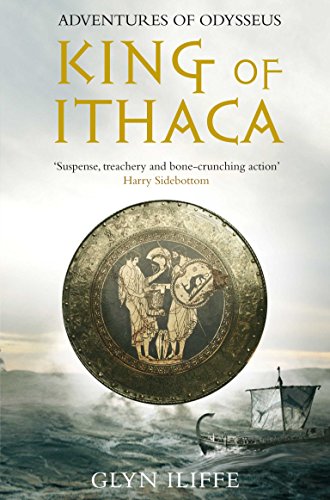 King of Ithaca
by Glyn Iliffe

King of Ithaca by Glyn Iliffe

Greece is a country in turmoil, divided by feuding kingdoms desiring wealth, power and revenge.

When Eperitus, a young exiled soldier, comes to the aid of a group of warriors in battle, little does he know that it will be the start of an incredible adventure. For he is about to join the charismatic Odysseus, Prince of Ithaca, on a vital quest to save his homeland.

Odysseus travels to Sparta to join the most famous heroes of the time in paying suit to the sensuous Helen. Armed with nothing but his wits and intelligence, he must enter a treacherous world of warfare and politics to compete for the greatest prize in Greece. But few care for the problems of an impoverished prince when war with Troy is beckoning . . .

An epic saga set in one of the most dramatic periods of history, King of Ithaca is a voyage of discovery of one man's journey to become a King - and a legend.

Glyn Iliffe studied English and Classics at university where he developed a passion for the ancient stories of Greek history and mythology. Well-travelled, Glyn has visited nearly 40 countries, trekked in the Himalayas, spent six weeks hitchhiking across North America, and had his collar bone broken by a bull in Pamplona. Glyn was a reservist in the paras for three years and now works for a building society. He is married with two daughters and lives in Market Harborough.

GOR010537098
King of Ithaca by Glyn Iliffe
Glyn Iliffe
Used - Like New
Paperback
Pan Macmillan
2009-04-03
416
0330452495
9780330452496
N/A
Book picture is for illustrative purposes only, actual binding, cover or edition may vary.
The book has been read, but looks new. The book cover has no visible wear, and the dust jacket is included if applicable. No missing or damaged pages, no tears, possible very minimal creasing, no underlining or highlighting of text, and no writing in the margins.