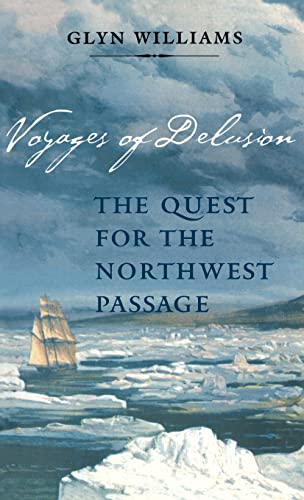 Voyages of Delusion
by Glyn Williams

In Stock
£5.99
In this gripping work of narrative history, Williams describes the adventures and mishaps of the misguided expeditions of the Age of Reason--the 18th century--in search of the "maritime philosopher's stone." 51 illustrations.
Very Good
Only 1 left

Voyages of Delusion: The Quest for the Northwest Passage by Glyn Williams

The eighteenth century-the Age of Reason-was characterized by determined attempts by philosophers, scientists, and political theorists to dispel myth, superstition, and ignorance. But the Age of Reason also witnessed some of the most irrational and vainglorious attempts by sailors and speculators to find a navigable Northwest Passage that would lead through the icy seas of the Arctic from Hudson Bay to the wealth of the Pacific Ocean. Lured by the promise of fame and riches, men endured paralyzing cold, malnutrition, and terrifying storms. Many lives and fortunes were lost in the quest for the elusive "maritime philosopher's stone."

In this gripping work of narrative history, Glyn Williams describes the adventures and mishaps of these misguided expeditions. Vividly written and replete with fascinating characters, Voyages of Delusion is a riveting contribution to the history of North American exploration.

"[An] extraordinary history--strewn with shipwrecks and dashed hopes, enlivened by noble failures and ignoble intrigues....The story is gripping. Such tales of hardship and grizzled stoicism...could hardly fail to entertain."
"Should be bought by anyone interested in maritime history, 18th century history or the foibles of human nature."

Glyn Williams is emeritus professor of history at the University of London. He is the author of many highly acclaimed books, including The Prize of All the Oceans, Atlas of North American Exploration, and The Great South Sea, the last published by Yale University Press.

GOR005034679
Voyages of Delusion: The Quest for the Northwest Passage by Glyn Williams
Glyn Williams
Used - Very Good
Hardback
Yale University Press
2016-03-14
488
0300098669
9780300098662
N/A
Book picture is for illustrative purposes only, actual binding, cover or edition may vary.
This is a used book - there is no escaping the fact it has been read by someone else and it will show signs of wear and previous use. Overall we expect it to be in very good condition, but if you are not entirely satisfied please get in touch with us.