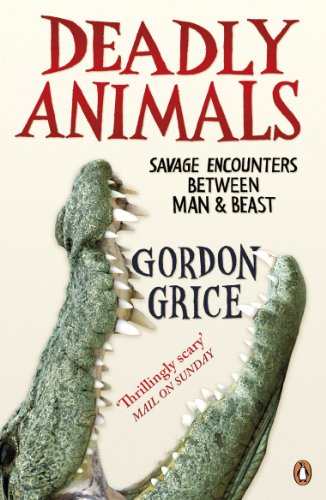 In Stock
£2.69
The dangers of the animal kingdom are the stuff of legend but the reality of man's vulnerability and of nature's savage power is far more various, improbable and chilling than even the most active imagination would fear. This work takes you on a journey to the dark side of the animal kingdom.
Very Good Good
Only 4 left

Consider, if you can, the case of Jacob Fowler, who heard what he thought was the sound of his own skull cracking between the jaws of a grizzly bear - only to discover that it was.

Or the Arizonan jogger who ran a mile back to her car with a rabid fox clamped to her arm before driving to hospital for live-saving inoculations. Or the woman who was attacked by a hyena, dragged from her tent by her face and survived to tell of her ordeal.

The dangers of the animal kingdom are the stuff of legend but the reality of man's vulnerability and of nature's savage power is far more various, improbable and chilling than even the most active imagination would fear. In this unique work of nature writing, you will encounter the most formidable predators on land and sea - as well as the most overlooked, bizarre and inventive hazards that mother nature has to offer. Meet the cougar that can leap 40 feet and clear 8-foot fences with a fully-grown deer in its jaws, the tapeworm that's been known to grow as long as 82 feet in the human gut and the elephant that single-handedly destroyed an oil tanker.

Drawing on an enormous host of true encounters between man and beast, this is the world's most authoritative compendium of animal attacks on human beings. With mordant wit and expert timing, Gordon Grice provides a gripping journey to the dark side of the animal kingdom and a celebration of its humbling, savage glory.

(Originally published in hardback as The Book of Deadly Animals.)

This book is the serious, adult, hardback equivalent of that splendid programme [Deadly 60] ... a work of mountainous, vertiginous research, a 350-page volume in which scarcely a word is wasted. This review can barely scratch the surface of its wonders * Daily Mail *
Thrillingly scary .... Though I can imagine this book making a perfect stocking filler for adolescent boys, it's also a beautifully-written, well-researched work * Mail on Sunday *
A wonderful, slightly terrifying, utterly captivating encounter with the animal world - not quite like anything I've ever read before. I think the only way I could possibly have enjoyed this more is if I happened to be an adventurous twelve-year-old boy, but still, even for a fully domesticated forty-year-old woman, it was both a thrill and an education * Elizabeth Gilbert, author of Eat Pray Love *
When it comes to the most deadly animals on the planet it is best to be prepared. With The Book of Deadly Animals forewarned is forearmed! -- Bear Grylls
Gordon Grice treats his deadly subject with wit and wry humour, but he does not sensationalise it ... His anecdotes include personal encounters with cougars, black widow spiders and a mouse that defecated in his strawberry pie * Independent *
A must for anyone even remotely thinking of getting a monkey, a sea lion, or, heaven forbid, a dog * David Sedaris *
A fresh, strange, and wonderful new voice in nature writing * Michael Pollan *
A lovely little book. After all we've done to them it's great to see the animals getting their own back -- Tony Fitzjohn, author of Born Wild
I wolfed it down * Will Self on The Red Hourglass *
First-rate, unsentimental writing about nature and about the ways that human beings try to cope with the most terrible cruelties that nature offers up * The New York Times *
Elegant and wryly funny * Esquire *

Gordon Grice is one of the world's leading authorities on the dangers of the animal kingdom, having dedicated a lifetime's study to the subject ever since a cougar wandered onto his family's farm when he was six. He is the author of The Red Hourglass: Lives of the Predators, and his writing has appeared in Granta, the New Yorker, Harper's and other magazines, and has been anthologized in The Best American Essays. He lives with his family in Wisconsin. www.deadlykingdom.com

GOR004759452
Deadly Animals: Savage Encounters Between Man and Beast by Gordon Grice
Gordon Grice
Used - Very Good
Paperback
Penguin Books Ltd
2012-04-05
416
0241951291
9780241951293
N/A
Book picture is for illustrative purposes only, actual binding, cover or edition may vary.
This is a used book - there is no escaping the fact it has been read by someone else and it will show signs of wear and previous use. Overall we expect it to be in very good condition, but if you are not entirely satisfied please get in touch with us.