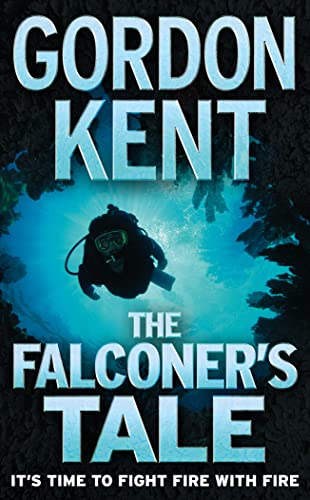 The Falconer's Tale
by Gordon Kent

An exhilarating new tale of modern espionage and international intrigue - sure to appeal to the many fans of Tom Clancy, Dale Brown and Patrick Robinson.

The Falconer's Tale by Gordon Kent

An exhilarating new tale of modern espionage and international intrigue - sure to appeal to the many fans of Tom Clancy, Dale Brown and Patrick Robinson.

Jerry Piat has been on the run from the FBI for two years, but he's about to be made an offer he cannot refuse. Clyde Partlow an upper CIA executive needs him for a mission that involves a member of the Saudi ruling clique, a fearsome man who's been cheating his own associates out of their funding for terrorism against the West ,and using the money for his own personal profit. Piat's job is to entice former agent Digger Hackbutt into working for the CIA again. Hackbutt will use his exemplary skills as a falconer as bait for the Saudi aristocrat, which in turn will hatch a daring plan for blackmail.

Meanwhile behind the scenes Alan Craik is highly suspicious of Clyde Partlow's intentions and sets about trying to find out exactly what is going on.

With the bait set and Jerry Pitat about to be a free man for the frist time in years, everything is set for success. But the best laid plans seldom run smoothly and the ultimate disaster is just moments away.

Kent knows his subject at first hand and the expertise shows on the page: high stakes, pounding tension and the best dogfights put on paper. A lot of thrillers these days, you come away feeling like you've been in a simulator. Gordon Kent straps you into the real thing. Enjoy the ride!'
IAN RANKIN,

`Flying, spying and dying - Night Trap is the real straight Navy stuff. Better strap yourself to the chair. I loved it.'
STEPHEN COONTS

`Tom Clancy used to have the high-tech military thriller stakes all to himself but now Gordon Kent has entered the field, and how. There's action on all fronts with Alan Craik at the heart of it, whether it's a carrier group in the Med confronting a rogue Russian sub commander, mounting a rescue mission for a captured CIA agent in Africa, or helping combat a high-level conspiracy in Washington. Non-stop ... a smoking gun of a story.'
Northern Echo

`Told with all the authority of inside knowledge ... an absorbing tale of international skulduggery.'
Irish News

`Consistently excellent ... loaded with gunfights, snappy dialogue and the aerial hijinks of supersonic jet fighters. The high testosterone doses satisfy, but best is the complex and clever web of motive Kent weaves for the mole.'
Publishers Weekly

GOR002787650
The Falconer's Tale by Gordon Kent
Gordon Kent
Used - Very Good
Paperback
HarperCollins Publishers
2008-09-01
512
0007178751
9780007178759
N/A
Book picture is for illustrative purposes only, actual binding, cover or edition may vary.
This is a used book - there is no escaping the fact it has been read by someone else and it will show signs of wear and previous use. Overall we expect it to be in very good condition, but if you are not entirely satisfied please get in touch with us.