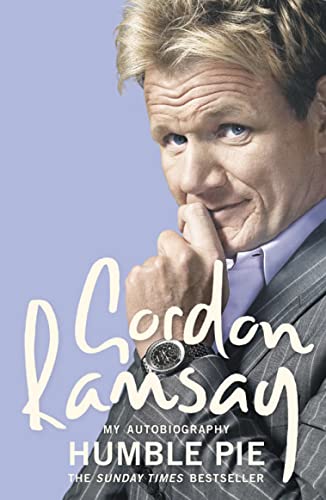 Everyone thinks they know the real Gordon Ramsay: rude, loud, pathologically driven, stubborn as hell. But this is his bestselling real story...

Everyone thinks they know the real Gordon Ramsay: rude, loud, pathologically driven, stubborn as hell. But this is his bestselling real story...

Humble Pie tells the full story of how he became the world's most famous and infamous chef: his difficult childhood, his brother's heroin addiction and his failed first career as a footballer: all of these things have made him the celebrated culinary talent and media powerhouse that he is today. Gordon talks frankly about:

* his tough childhood: his father's alcoholism and violence and the effects on his relationships with his mother and siblings,

* his first career as a footballer: how the whole family moved to Scotland when he was signed by Glasgow Rangers at the age of fifteen, and how he coped when his career was over due to injury just three years later,

* Gordon's early career: learning his trade in Paris and London; how his career developed from there: his time in Paris under Albert Roux and his seven Michelin-starred restaurants.

* Kitchen life: Gordon spills the beans about life behind the kitchen door, and how a restaurant kitchen is run in Anthony Bourdain-style.

* How he copes with the impact of fame on himself and his family: his television career, the rapacious tabloids, and his own drive for success.

`Gordon Ramsay's Humble Pie - so exuberantly angry boastful, cliche-ridden, expletive-laden and touchingly sincere that I can't believe that a single sentence has been written by anyone but the failed footballer, great cook, telly star and businessman himself. He's the genuine bollocks, as he's so fond of saying, and this is the tale of his personal class struggle.' - The Observer

`I cannot recommend strongly enough that every BII member reads it. It's so refreshing and energising - and oddly the fact that every fifth word begins with 'F' adds to its charm, its passion and its delight...The book is an inspiration. Anybody running any kind of business will benefit from reading this.' BII Business magazine

Gordon Ramsay's radical career change at 17 years old led him to London and to huge success as chef, restaurant-empire-builder and celebrity. Gordon has published nine bestselling recipe books and has starred in the hugely successful television series': the Bafta award-winning Ramsay's Kitchen Nightmares, Hell's Kitchen and The F Word. In 2006 he was appointed OBE and saw the launch of his New York restaurant.

GOR000407921
Humble Pie by Gordon Ramsay
Gordon Ramsay
Used - Very Good
Paperback
Unknown
0
0007229682
9780007229680
N/A
Book picture is for illustrative purposes only, actual binding, cover or edition may vary.
This is a used book - there is no escaping the fact it has been read by someone else and it will show signs of wear and previous use. Overall we expect it to be in very good condition, but if you are not entirely satisfied please get in touch with us.