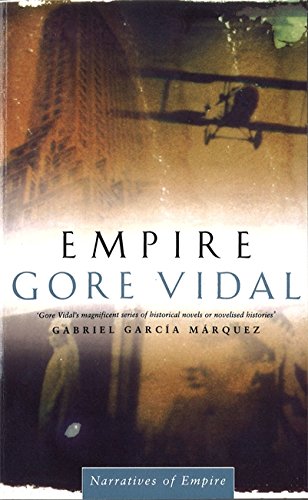 In Stock
£5.49
* The fourth novel in the chronology of Vidal's epic NARRATIVES OF EMPIRE, embodying the passage of American history.
Very Good Well Read
Only 4 left

Here is the story of arguably America's finest hour; of the time when the twentieth century dawned, Queen Victoria died, and America, basking deliciously in excess wealth, rather thought it might snap up an empire of its own. Yet while politicians muse over the potential of China or the Philippines - even Russia - empires are being built at home; railway empires; industrial empires; newspaper empires. Into this arena float the delectable Caroline Sanford, putative heiress and definite catch. Caroline is an oddity; she has been raised in France where they teach rich girls to talk and think. American society women, required only to think of themselves as the most interesting beings on earth, are rather alarmed. American men are amused - until Caroline shirks from marriage, sues her brother, buys a newspaper, and becomes that even greater oddity - a powerful woman. Mingling with the movers and shakers of the day - with President McKinley, Theodore Roosevelt, William Randolf Hearst, Henry James, the Astors, Vanderbilts and Whitneys - Caroline Sanford echoes the glorious passage of the United States as it sweeps into a new century, reaching boldly for the world.

Mr Vidal has surpassed himself in EMPIRE and written what now stands as the best in the series ... by turns caustic, witty and outrageous fun * NEW YORK TIMES *
Magnificent * Gabriel Garcia Marquez *

Gore Vidal was at the centre of literary and intellectual life for half a century and wrote 'The Narratives of a Golden Age' series as well as countless bestsellers. He died on 31st July 2012.

GOR000728788
Empire: Number 4 in series by Gore Vidal
Gore Vidal
Narratives of empire
Used - Very Good
Paperback
Little, Brown Book Group
1994-04-02
576
0349105286
9780349105284
N/A
Book picture is for illustrative purposes only, actual binding, cover or edition may vary.
This is a used book - there is no escaping the fact it has been read by someone else and it will show signs of wear and previous use. Overall we expect it to be in very good condition, but if you are not entirely satisfied please get in touch with us.