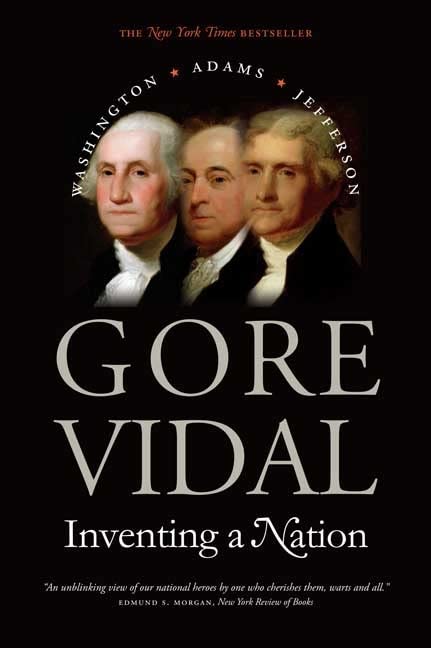 Inventing a Nation
by Gore Vidal

In Stock
£5.99
One of the master stylists of American literature, Gore Vidal now provides us with his uniquely irreverent take on America's founding fathers, bringing them to life at key moments of decision in the birthing of the nation.
Very Good
Only 3 left

Gore Vidal, one of the master stylists of American literature and one of the most acute observers of American life and history, turns his immense literary and historiographic talent to a portrait of the formidable trio of George Washington, John Adams, and Thomas Jefferson. In Inventing a Nation, Vidal transports the reader into the minds, the living rooms (and bedrooms), the convention halls, and the salons of Washington, Jefferson, Adams, and others. We come to know these men, through Vidal's splendid and percipient prose, in ways we have not up to now-their opinions of each other, their worries about money, their concerns about creating a viable democracy. Vidal brings them to life at the key moments of decision in the birthing of our nation. He also illuminates the force and weight of the documents they wrote, the speeches they delivered, and the institutions of government by which we still live. More than two centuries later, America is still largely governed by the ideas championed by this triumvirate.

"Pure Vidal. . . . Inventing a Nation is his edgy tribute to the way we were before the fall."--Los Angeles Times Book Review

"[Vidal offers] details that enliven and . . . reflections on the past that point sharply to today." --Richard Eder, New York Times

Gore Vidal, novelist, essayist, and playwright, is one of America's great men of letters. Among his many books are United States: Essays 1951-1991 (winner of the National Book Award), Burr: A Novel, Lincoln, and the recent Perpetual War for Perpetual Peace.

GOR002794276
Inventing a Nation: Washington, Adams, Jefferson by Gore Vidal
Gore Vidal
Icons of America
Used - Very Good
Paperback
Yale University Press
2004-08-11
208
0300105924
9780300105926
N/A
Book picture is for illustrative purposes only, actual binding, cover or edition may vary.
This is a used book - there is no escaping the fact it has been read by someone else and it will show signs of wear and previous use. Overall we expect it to be in very good condition, but if you are not entirely satisfied please get in touch with us.