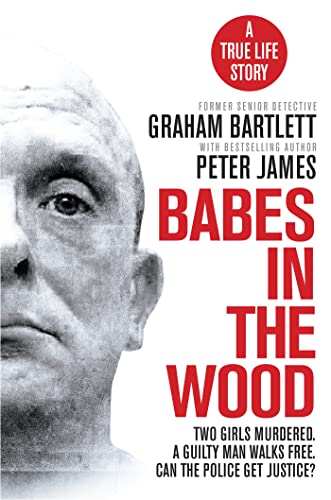 Babes in the Wood
by Graham Bartlett

Babes in the Wood Summary

Babes in the Wood: Two girls murdered. A guilty man walks free. Can the police get justice? by Graham Bartlett

'A triumph . . . Babes in the Wood should be required reading for all budding detectives' - Malcolm Bacon, former DI

On 9 October 1986, nine-year-olds Nicola Fellows and Karen Hadaway went out to play on their Brighton estate. They would never return home; their bodies discovered the next day concealed in a local park. This devastating crime rocked the country.

With unique access to the officers charged with catching the killer, former senior detective Graham Bartlett and bestselling author Peter James tell the compelling inside story of the investigation as the net tightens around local man Russell Bishop. The trial that follows is one of the most infamous in the history of Brighton policing - a shock result sees Bishop walk free.

Three years later, Graham is working in Brighton CID when a seven-year-old girl is abducted and left to die. She survives . . . and Bishop's name comes up as a suspect. Is history repeating itself? Can the police put him away this time, and will he ever be made to answer for his past horrendous crimes? Both gripping police procedural and an insight into the motivations of a truly evil man, Babes in the Wood by Graham Bartlett with Peter James is a fascinating account of what became a thirty-two year fight for justice.

Babes in the Wood Reviews

This book is an extremely well-written and detailed account of the thirty year journey from the tragedy of the murder of two loved young girls, through a failed prosecution, and a families tireless pursuit to see justice done, culminating in the complex and challenging Sussex Police investigating leading to the rightful conviction of Russell Bishop. It is a testament to what a families determination and Police investigative skills can achieve in bringing justice to these two innocent young girls. -- Superintendent Adam Hibbert, former head of Surrey and Sussex Major Crime Team

When appointed to set up a Cold Case Review system in Sussex in 1999 this case above all others cried out to be solved.
Unfortunately at that time the law did not allow a further prosecution of the suspect. Once the law had changed the dedication of a number of Sussex Police officers with forensic support and the unflinching commitment of the victims' families resulted in the successful prosecution of Bishop after thirty-two years. Babes in the Wood tells this harrowing and tragic story with great accuracy and sensitivity, revealing for the first time the inside story of how the police eventually brought justice for the two little girls. It is a story that needs to be told.

-- David Gaylor, Retired Detective Chief Superintendent, Sussex Police and 'the real life Roy Grace'
Make no mistake, a criminal trial is not about finding the truth, it is only ever about the question of proof. Babes in the Wood highlights the painstaking and frustrating, slow and, on occasion, ponderous route to achieving the goals of both proof and truth. It is an excellent observation of professionalism and downright persistence, working within the strict framework of relatively new legislation, achieving the successful prosecution of one of Britain's most dangerous, paedophilic psychopaths. A triumph, this book is not just a testament to the police officers, but also to the parents and families of the victims, who had not only to endure so many years of distress and monumental grief, but also the lingering distrust and antipathy from their own community and neighbours, which thankfully was, eventually dismissed. The authenticity of this book, the honesty, professionalism and persistent investigation displayed, the array of characters, frustrations and procedures - all these are a shining example of both the truth and accuracy of an investigation, leading to one of the most dramatic re-trials seen within the United Kingdom to date. Babes in the Wood should be required reading for all budding detectives. -- Former DI Malcolm Bacon, investigating officer who saw Bishop jailed for life in 1990

Graham Bartlett was a Sussex police officer for thirty years. In 1989 he was posted to Brighton and Hove, becoming a detective the following year. Quite uniquely he served the city through every rank, rising to become a homicide senior investigating officer and Detective Superintendent for Public Protection as well as a strategic firearms and public order commander. He then achieved his life's ambition, as Chief Superintendent, to become the city's Police Commander - or, as Peter James jokingly called him - the 'Sheriff of Brighton', a job he held and loved for four years. He pioneered Operation Reduction, the enduring approach to slashing drugs deaths and reducing crime as well as cutting disorder at protests by adopting methods developed by one of the world's foremost crowd psychologists. He lives in Sussex.

Synonymous with plot-twisting pageturners, Peter James has garnered an army of loyal fans throughout his storytelling career - which also included stints writing for TV and producing films. He has won over forty awards for his work, including the WHSmith Best Crime Author of All Time Award, Crime Writers' Association Diamond Dagger and a BAFTA nomination for The Merchant of Venice starring Al Pacino and Jeremy Irons for which he was an Executive Producer. Many of Peter's novels have been adapted for film, TV and stage.

GOR010388828
Babes in the Wood: Two girls murdered. A guilty man walks free. Can the police get justice? by Graham Bartlett
Graham Bartlett
Used - Very Good
Paperback
Pan Macmillan
2020-02-20
352
1529025567
9781529025569
N/A
Book picture is for illustrative purposes only, actual binding, cover or edition may vary.
This is a used book - there is no escaping the fact it has been read by someone else and it will show signs of wear and previous use. Overall we expect it to be in very good condition, but if you are not entirely satisfied please get in touch with us.