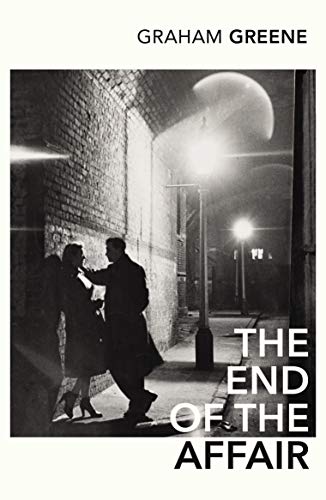 The End Of The Affair
by Graham Greene

Used Price
£3.59
New RRP £8.99
Free Shipping in the UK
WITH AN INTRODUCTION BY MONICA ALIThe love affair between Maurice Bendrix and Sarah, flourishing in the turbulent times of the London Blitz, ends when she suddenly and without explanation breaks it off.
Very Good Good Well Read

The End Of The Affair Summary

The End Of The Affair by Graham Greene

WITH AN INTRODUCTION BY MONICA ALI The love affair between Maurice Bendrix and Sarah, flourishing in the turbulent times of the London Blitz, ends when she suddenly and without explanation breaks it off. After a chance meeting rekindles his love and jealousy two years later, Bendrix hires a private detective to follow Sarah, and slowly his love for her turns into an obsession.

The End Of The Affair Reviews

"Singularly beautiful and moving" -- Evelyn Waugh
"One of the most true and moving novels of my time, in anybody's language" * William Faulkner *
"In a class by himself...the ultimate chronicler of twentieth-century man's consciousness and anxiety" -- William Golding
"Devastating study of the collision of different kinds of faith, betrayal and commitment" * The Times *
"Greene's novel of illicit love captures perfectly the atmosphere of rainy wartime London - try to read this in one sitting if you can" * Express *

Graham Greene was born in 1904. He worked as a journalist and critic, and in 1940 became literary editor of the Spectator. He was later employed by the Foreign Office. As well as his many novels, Graham Greene wrote several collections of short stories, four travel books, six plays, three books of autobiography, two of biography and four books for children. He also wrote hundreds of essays, and film and book reviews. Graham Greene was a member of the Order of Merit and a Companion of Honour. He died in April 1991.

GOR001344579
The End Of The Affair by Graham Greene
Graham Greene
Used - Very Good
Paperback
Vintage Publishing
2004-10-07
192
0099478447
9780099478447
N/A
Book picture is for illustrative purposes only, actual binding, cover or edition may vary.
This is a used book - there is no escaping the fact it has been read by someone else and it will show signs of wear and previous use. Overall we expect it to be in very good condition, but if you are not entirely satisfied please get in touch with us.