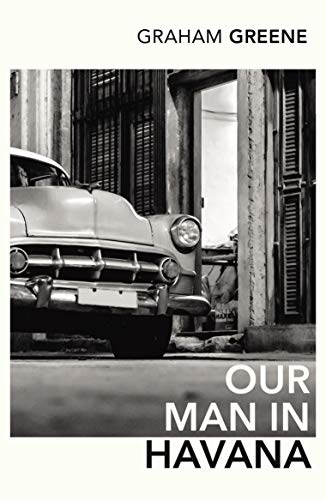 Our Man In Havana
by Graham Greene

'British Intelligence being sent up something rotten' Daily Telegraph

Wormold is a vacuum cleaner salesman in a city of power cuts.

Our Man In Havana Summary

Our Man In Havana by Graham Greene

'British Intelligence being sent up something rotten' Daily Telegraph

Wormold is a vacuum cleaner salesman in a city of power cuts. His adolescent daughter spends his money with a skill that amazes him, so when a mysterious Englishman offers him an extra income he's tempted. In return all he has to do is carry out a little espionage and file a few reports. But when his fake reports start coming true, things suddenly get more complicated and Havana becomes a threatening place.

WITH AN INTRODUCTION BY CHRISTOPHER HITCHENS

Our Man In Havana Reviews

As comical, satirical, atmospherical an "entertainment" as he has given us * Daily Telegraph *
He had a sharp nose for trouble and injustice. In Our Man In Havana - a witty send-up of an agent's life - it was Cuba before Castro * Financial Times *
Nobody should be anywhere near power who hasn't read (or seen the film of) Our Man in Havana, a powerful satire on the silly world of spying by a man who had experienced it * Mail on Sunday *
Graham Greene captured a pre-Castro Cuba of daiquiris and decadence... hilarious * Independent *
British Intelligence being sent up something rotten * Daily Telegraph, 20 Best Spy Novels of All Time *

Graham Greene was born in 1904. On coming down from Balliol College, Oxford, he worked for four years as sub-editor on The Times. He established his reputation with his fourth novel, Stamboul Train. In 1935 he made a journey across Liberia, described in Journey Without Maps, and on his return was appointed film critic of the Spectator. In 1926 he had been received into the Roman Catholic Church and visited Mexico in 1938 to report on the religious persecution there. As a result he wrote The Lawless Roads and, later, his famous novel The Power and the Glory. Brighton Rock was published in 1938 and in 1940 he became literary editor of the Spectator. The next year he undertook work for the Foreign Office and was stationed in Sierra Leone from 1941 to 1943. This later produced the novel The Heart of the Matter, set in West Africa. As well as his many novels, Graham Greene wrote several collections of short stories, four travel books, six plays, three books of autobiography - A Sort of Life, Ways of Escape and A World of My Own (published posthumously) - two of biography and four books for children. He also contributed hundreds of essays, and film and book reviews, some of which appear in the collections Reflections and Mornings in the Dark. Many of his novels and short stories have been filmed and The Third Man was written as a film treatment. Graham Greene was a member of the Order of Merit and a Companion of Honour. He died in April 1991.

GOR001264132
Our Man In Havana by Graham Greene
Graham Greene
Used - Very Good
Paperback
Vintage Publishing
2001-03-01
256
0099286084
9780099286080
N/A
Book picture is for illustrative purposes only, actual binding, cover or edition may vary.
This is a used book - there is no escaping the fact it has been read by someone else and it will show signs of wear and previous use. Overall we expect it to be in very good condition, but if you are not entirely satisfied please get in touch with us.