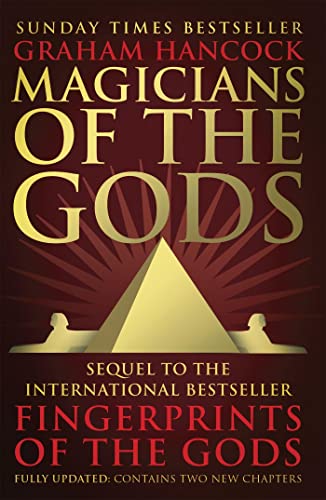 Magicians of the Gods
by Graham Hancock

Magicians of the Gods Summary

Magicians of the Gods: The Forgotten Wisdom of Earth's Lost Civilisation by Graham Hancock

Graham Hancock's multi-million bestseller Fingerprints of the Gods remains an astonishing, deeply controversial, wide-ranging investigation of the mysteries of our past and the evidence for Earth's lost civilization. Twenty years on, Hancock returns with a book filled with completely new, scientific and archaeological evidence, which has only recently come to light...

The evidence revealed in this book shows beyond reasonable doubt that an advanced civilization that flourished during the Ice Age was destroyed in the global cataclysms between 12,800 and 11,600 years ago.

Near the end of the last Ice Age 12,800 years ago, a giant comet that had entered the solar system from deep space thousands of years earlier, broke into multiple fragments. Some of these struck the Earth causing a global cataclysm on a scale unseen since the extinction of the dinosaurs. At least eight of the fragments hit the North American ice cap, while further fragments hit the northern European ice cap.

The impacts, from comet fragments a mile wide approaching at more than 60,000 miles an hour, generated huge amounts of heat which instantly liquidized millions of square kilometres of ice, destabilizing the Earth's crust and causing the global Deluge that is remembered in myths all around the world.

A second series of impacts, equally devastating, causing further cataclysmic flooding, occurred 11,600 years ago, the exact date that Plato gives for the destruction and submergence of Atlantis.

But there were survivors - known to later cultures by names such as 'the Sages', 'the Magicians', 'the Shining Ones', and 'the Mystery Teachers of Heaven'. They travelled the world in their great ships doing all in their power to keep the spark of civilization burning. They settled at key locations - Gobekli Tepe in Turkey, Baalbek in the Lebanon, Giza in Egypt, ancient Sumer, Mexico, Peru and across the Pacific where a huge pyramid has recently been discovered in Indonesia. Everywhere they went these 'Magicians of the Gods' brought with them the memory of a time when mankind had fallen out of harmony with the universe and paid a heavy price.

A memory and a warning to the future... For the comet that wrought such destruction between 12,800 and 11,600 years may not be done with us yet. Astronomers believe that a 20-mile wide 'dark' fragment of the original giant comet remains hidden within its debris stream and threatens the Earth. An astronomical message encoded at Gobekli Tepe, and in the Sphinx and the pyramids of Egypt,warns that the 'Great Return' will occur in our time...

Magicians of the Gods Reviews

A great yarn... [Hancock] is a writer with a first-rate feel for colour and ambience... * Sunday Times *
Hancock's book is an absorbing big-picture analysis as well as a cautionary tale. * Nexus Magazine *

As East Africa correspondent of The Economist in the early eighties Graham Hancock began to write a series of highly acclaimed books on economics, politics and foreign aid. His life took a whole new turn when he became fascinated by rumours that the Ark of the Covenant is real artefact, hidden somewhere in northern Africa. The story of his detective work, tracking it down to its supposed final resting place became the international bestseller The Sign and the Seal (now in production as a feature film.) More bestsellers in the field of 'alternative history' followed, including Fingerprints of the Gods, Keeper of Genesis (the latter co-authored with Robert Bauval) and Heaven's Mirror. In Supernatural he described his experiences journeying to experiment with hallucinogenic drugs amongst tribes people for whom they represent a gateway into supernatural realms. His ideas on exploring new dimensions in consciousness became the subject of his controversial TED talks.
Graham Hancock's books have been translated into twenty-seven languages and have sold over nine million copies worldwide. His public lectures and broadcasts, including two major TV series for Channel 4, Quest for the Lost Civilisation, and Flooded Kingdoms of the Ice Age, have further established his reputation as an unconventional thinker who raises controversial questions about humanity`s past.

NGR9781444779707
Magicians of the Gods: The Forgotten Wisdom of Earth's Lost Civilisation by Graham Hancock
Graham Hancock
New
Paperback
Hodder & Stoughton
2016-08-11
608
1444779702
9781444779707
N/A
Book picture is for illustrative purposes only, actual binding, cover or edition may vary.
This is a new book - be the first to read this copy. With untouched pages and a perfect binding, your brand new copy is ready to be opened for the first time.