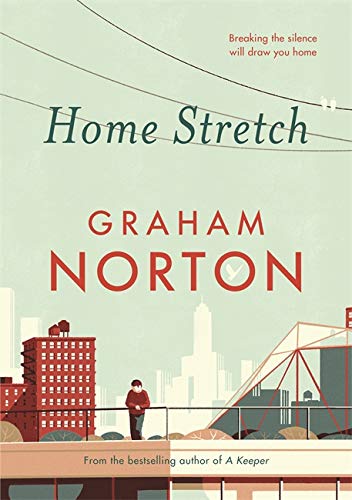 New Price
£19.99
Free Shipping in the UK
In the compelling new novel, Home Stretch, Graham Norton demonstrates his keen understanding of the power of stigma and secrecy - with quietly devastating results.
New£19.99

Home Stretch: From the bestselling author of The Keeper by Graham Norton

'Graham Norton's new novel has me in floods... His gift for characterisation is positively Binchy-esque! Such nuance and warmth! It's GORGEOUS' MARIAN KEYES

'Full of heart and humanity and I loved every single page. What a storyteller!' ELIZABETH DAY

'I loved HOME STRETCH ... one of those books that stays with you so long after you've finished it' NIGELLA LAWSON

'A subtle portrait of small-town Ireland; an unblinking study of shame & homophobia; a map of cultural shifts between 1980s & now; a kind, wise, perceptive novel by an author rich in these qualities.' DAVID MITCHELL

'Beautifully written. Fasten your seatbelts, it's going to be a bumpy read. Utterly fantastic.' LIZ NUGENT

'[Graham Norton is a] king of the page turners... A total triumph' ANNE GRIFFIN

Shame and longing can flow through generations, but the secrets of the heart will not be buried for ever.

It is 1987 and a small Irish community is preparing for a wedding. The day before the ceremony a group of young friends, including bride and groom, drive out to the beach. There is an accident. Three survive, but three are killed.

The lives of the families are shattered and the rifts between them are felt throughout the small town. Connor is one of the survivors. But staying among the angry and the mourning is almost as hard as living with the shame of having been the driver. He leaves the only place he knows for another life, taking his secrets with him. Travelling first to Liverpool, then London, he makes a home - of sorts - for himself in New York. The city provides shelter and possibility for the displaced, somewhere Connor can forget his past and forge a new life.

But the secrets, the unspoken longings and regrets that have come to haunt those left behind will not be silenced. And before long, Connor will have to confront his past.

Graham Norton's powerful and timely novel of emigration and return demonstrates his keen understanding of the power of stigma and secrecy - with devastating results.

Atmospheric, creepy and impossible to put down. - The TimesA compelling and moving story, expertly told, that will draw you in and keep you in its grip until the last page. - Daily ExpressMagnificent ... his writing is evocative and perfect. His grasp of human loneliness and longing is beautiful and comforting. - Marian KeyesI raved about Holding two years ago ... A Keeper is even better. A powerful, very sad story, beautiful writing, two time frames that are perfectly balanced. Outstanding. Will easily be one of my books of 2018. - John BoyneA gripping, thoughtful tale about the search for identity, belonging and self-possession. - ObserverMoving and darkly funny. - Good HousekeepingSmart, well-written and thoroughly entertaining. - Irish IndependentIt's a sad and lovely book, brimful of tenderness and compassion, where the revelations of the past upturn the perceptions of the present. - Sunday Express

Graham Norton is one of the UK's most treasured comedians and presenters. Born in Clondalkin, a suburb of Dublin, Norton's first big TV appearance was as Father Noel Furlong on Channel 4's Father Ted in the early 1990s. He then secured a prime time slot on Channel 4 with his chat shows So Graham Norton and V Graham Norton.

Known for his quick wit Graham began hosting a variety of talent shows on BBC One from Strictly Dance Fever and Andrew Lloyd Webber's How Do You Solve A Problem Like Maria? to The Eurovision Song Contest and BAFTAs. Graham was soon approached by the BBC to front his own self-titled chat show The Graham Norton Show in 2007.

Graham's third novel will be published in hardback, eBook, and audiobook in October.