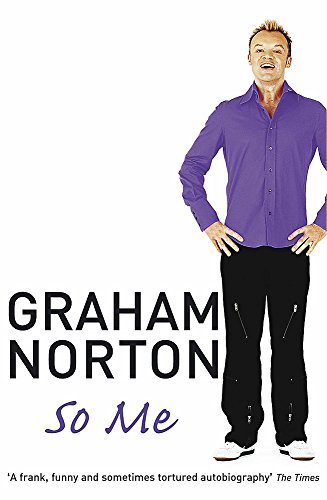 So Me
by Graham Norton

In Stock
£8.99
SO good. SO funny. SO naughty. SO honest. The intimate and hilarious memoir of the country's favourite TV presenter comes to paperback.
Like New Very Good Good
12 in stock

So Me by Graham Norton

Graham Norton, whose impish charm and quick wit has earned him a place in our hearts, looks back at his life so far. In his own words, SO ME is 'a real romp through a journey from living in a cockroach-infested council flat in Hackney to buying Claudia Schiffer's townhouse in Manhattan, from my mother dragging me to school to me dragging her to Sharon Stone's house for New Year's brunch'.

From a not-so miserable Irish childhood to dropping out of Cork University and joining a commune of hippies in San Francisco, from his disastrous attempts at becoming a serious actor to the rise of his comedy career in London, this is a hilarious, insightful and moving account of a colourful life.

A frank, funny and sometimes tortured autobiography * Andrew Billen, The Times *
Honest and entertaining ... he uses his quick wit and humour to amuse the reader from start to finish * The Sun *
Frank and funny * Mirror *
A jaunty romp with oodles of humour * Hot Stars (OK) *
A hugely engaging account of his life that is written with the same breezy bravura that he exhibits on telly ... There are points in the book when I found myself laughing out loud, and others when I was unusually moved ... Celebrity memoirs are rarely as genuine or as generously candid * Herald *

Graham Norton is one of the UK's best loved broadcasters. He presents The Graham Norton Show on BBC1 and has a weekly show on BBC Radio 2. He is the winner of nine BAFTA awards. Born in Dublin and raised in West Cork, Norton now lives in London. His debut novel Holding was a commercial and critical success, winning Norton the Irish Independent Popular Fiction award at the Bord Gais Irish Book Awards in 2016.

GOR000747540
So Me by Graham Norton
Graham Norton
Used - Very Good
Paperback
Hodder & Stoughton General Division
2005-04-11
352
0340833491
9780340833490
N/A
Book picture is for illustrative purposes only, actual binding, cover or edition may vary.
This is a used book - there is no escaping the fact it has been read by someone else and it will show signs of wear and previous use. Overall we expect it to be in very good condition, but if you are not entirely satisfied please get in touch with us.