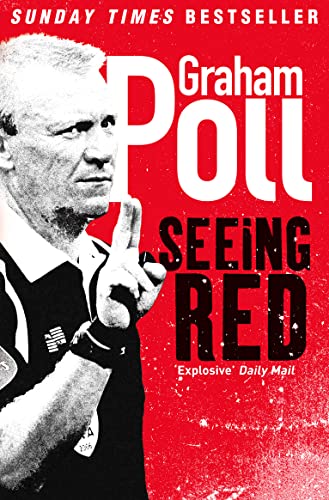 The most high-profile referee this country has ever seen, the controversial and opinionated Graham Poll, exposes the myth that referees are the game's silent men, and opens the lid on the shocking and often unbelievable world of football that few outsiders get to see. Fully updated paperback edition with new chapters.

The most high-profile referee this country has ever seen, the controversial and opinionated Graham Poll, exposes the myth that referees are the game's silent men, and opens the lid on the shocking and often unbelievable world of football that few outsiders get to see. Fully updated paperback edition with new chapters.

Seeing Red is Graham Poll's incisive insight into football from his prime position as the man in black, the one in control, the eye that sees all. A Premier League referee since 1991 and with ten years as an international referee, Graham Poll has handled some of the toughest games in the Premiership involving Arsenal, Manchester United, Liverpool and Chelsea, as well as European Championships and World Cups - in total over 1500 matches.

What is it like to referee the biggest matches in international football? What really goes on between the players in the tunnel before a match and in the dressing room after? Who are the nastiest footballers? And the funniest? Who is the smartest manager? And are the bureaucrats ruining the beautiful game?

Controversial and opinionated, Poll has crossed swords with some of the biggest names in world football and shares private conversations with the likes of Alex Ferguson, Jose Mourinho, Sepp Blatter and Steve McClaren, and the inside story behind controversial incidents involving Roy Keane, David Beckham, Patrick Vieira and current England captain John Terry, among others. Poll also talks about the infamous 2006 World Cup match when he failed to send off a Croatian player after three yellow cards in a crucial tie against Australia, returning home early in disgrace and with his career in meltdown.

The games, the players, the managers, the suits - the most outspoken referee in the modern game tells it as it really is.

`Poll's fascinating response to years of criticism as one of England's top officials is far more interesting than the standard fare trotted out by most players these days - it also evokes the rarest of things in a football fan: sympathy for the referee.' 442 Magazine

Graham Poll was born in 1963. A one-time employee of Nike - where he turned down a Sales Directorship to pursue a refereeing career - he has over 27 years of experience as an FA Premier League and international referee. As well as refereeing the 2006/07 UEFA Cup final, he has been the English representative at two World Cups and Euro 2000, and has handled games from the Bernebeu to the San Siro, and from Old Trafford to Stamford Bridge. He retired from professional refereeing in the summer of 2007.

Mick Dennis has worked as sports editor of the Evening Standard and football correspondent for the Daily Express. In his spare time, he is also a football referee.

GOR001147891
Seeing Red by Graham Poll
Graham Poll
Used - Very Good
Paperback
HarperCollins Publishers
2008-06-01
416
0007262833
9780007262830
N/A
Book picture is for illustrative purposes only, actual binding, cover or edition may vary.
This is a used book - there is no escaping the fact it has been read by someone else and it will show signs of wear and previous use. Overall we expect it to be in very good condition, but if you are not entirely satisfied please get in touch with us.