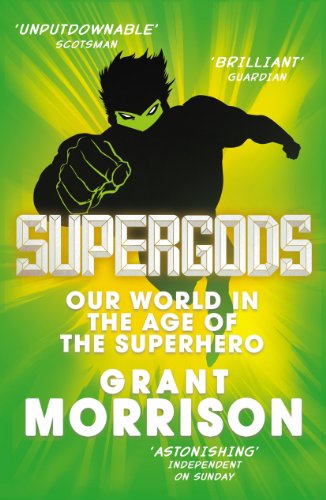 In Stock
£4.99
For Grant Morrison, possibly the greatest of contemporary superhero storytellers, these heroes are not simply characters but powerful archetypes whose ongoing story arcs reflect and predict the lives we live.
Very Good Good Well Read
9 in stock

Supergods: Our World in the Age of the Superhero by Grant Morrison

In 1938 Action Comics #1 introduced the world to Superman. In a matter of years, the skies of our imaginations were filled with mutants, aliens and vigilantes. Batman, Wonder Woman and the X-Men - in less than a century they've gone from not existing at all to being everywhere we look. But why? For Grant Morrison, possibly the greatest of contemporary superhero storytellers, these heroes are not simply characters but powerful archetypes whose ongoing story arcs reflect and predict the lives we live. In this exhilarating book, Morrison draws on history, art, mythology, and his own astonishing journey to provide the first true chronicle of the superhero.

"Supergods is a rather astonishing piece of work that leaves you feeling pretty much as those first readers of Superman in 1938 must have felt: slightly more aware of our place in the universe and cautiously optimistic about the future" * Independent on Sunday *
"Magnificently idiosyncratic new history of the genre... Supergods is packed with intriguing nuggets of insight, and it will be fascinating to see how the trends it discerns play out... What was it they said about the geeks inheriting the earth?" * Daily Telegraph *
"Supergods is perhaps the most satisfactory potted history of the American comic book industry I've ever read (and I've read just about all its competitors) while also offering a brilliantly incisive, if very personal, appreciation and analysis of the most important comic books or graphic novels - call 'em what you will - to be published in the past 30 years" * Guardian *
"Part manifesto, part memoir, part idiosyncratic spiritual/philosophical tract... Morrison knows the genre and loves it deeply, and both that knowledge and that love shine through... an often funny and sometimes very moving account of Morrison's life as seen through the lens of his relationship with superheroes, which began in childhood" -- Katherine Farmar * Irish Times *
"The author shows a deft turn of phrase while appraising his fellow creators...Supergods proves an entertaining introduction to newcomers" * Metro *

Grant Morrison was born in Glasgow in 1960. As a comics writer, he is renowned for his bold reinventions of existing superheroes and his own authored titles. He has had successful runs on Batman, Animal Man, Doom Patrol, JLA, The Invisibles, New X-Men, Fantastic Four and All Star Superman His Batman: Arkham Asylum is the best-selling original graphic novel ever published. A documentary on his life and work, Grant Morrison: Talking with Gods, was released in November 2010.

GOR005050279
Supergods: Our World in the Age of the Superhero by Grant Morrison
Grant Morrison
Used - Very Good
Paperback
Vintage Publishing
2012-07-26
480
0099546671
9780099546672
N/A
Book picture is for illustrative purposes only, actual binding, cover or edition may vary.
This is a used book - there is no escaping the fact it has been read by someone else and it will show signs of wear and previous use. Overall we expect it to be in very good condition, but if you are not entirely satisfied please get in touch with us.