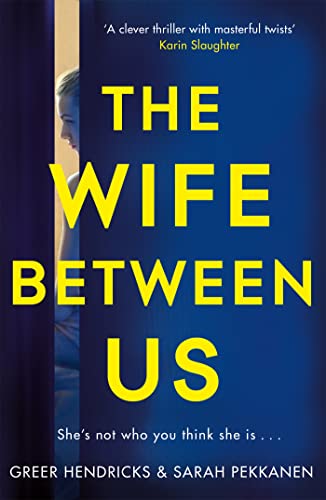 The Wife Between Us
by Greer Hendricks

The Wife Between Us Summary

The Wife Between Us: A Richard and Judy Book Club Pick 2018 by Greer Hendricks

'A fiendishly clever thriller in the vein of Gone Girl and The Girl on the Train. This one will keep you guessing.' - Anita Shreve, author of The Stars are Fire

When you read this book, you will make many assumptions.

It's about a jealous wife, obsessed with her replacement.

It's about a younger woman set to marry the man she loves.

The first wife seems like a disaster; her replacement is the perfect woman.

You will assume you know the motives, the history, the anatomy of the relationships.

You will be wrong.

The Wife Between Us is the first collaboration between Greer Hendricks and Sarah Pekkanen; a gripping thriller with film rights sold to the creators of The Girl On the Train.

The Wife Between Us Reviews

It's easy to see why Steven Spielberg has snapped up the film rights to this book, which is an original take on a winning formula . . . The small twists and turns of the plot are riveting but the pivotal surprise is gobsmacking and it succeeds because of the scrupulous attention to the psychological details of all the characters * Daily Mail *
A clever thriller with masterful twists -- Karin Slaughter
A twisty, mind-bending novel about marriage and betrayal. A gripping plot and fascinating characters; this book will keep you turning the pages and guessing until the very end. A must-read! -- Lauren Weisberger, New York Times bestselling author of The Devil Wears Prada
A fiendishly smart cat-and-mouse thriller * New York Times Book Review *
Fans of Gone Girl and The Girl On The Train will adore this classy domestic noir set in New York . . . it has a humdinger of a twist which I didn't see coming . . . the result is a fast-paced and hugely enjoyable thriller * Sunday Express *
Loved it! What a fantastic story, and the twist completely blind-sided me - and that is rare, believe me! -- Mandasue Heller
Buckle up, because you won't be able to put this one down * Glamour *

The Wife Between Us delivers a whipsmart, twisty plot in a taut, pacy
narrative. It's terrific and troubling. This is one scary love triangle where
you won't know who to trust. I loved it

-- Gilly Macmillan, New York Times bestselling author of What She Knew
A fiendishly clever thriller in the vein of Gone Girl and The Girl on the Train. This one will keep you guessing. -- Anita Shreve, author of The Stars are Fire
An angry ex-wife is stalking a young, innocent fiancee who is a carbon copy of her former self...or so it seems. Since you know there's got to be more to it than this, the fun is in trying to figure it out before they tell you. We didn't! Easy to read, smoothly put together * Kirkus Reviews *
This amazing story gallops along at breakneck speed, with an ending that smacks you between the eyes and takes your breath away. These authors are destined to become trail blazers in the field of psychological suspense books that explode in your hands! -- Nancy Simpson-Brice, Book Vault
A page turner and as compelling a read as any I've ever read, including Gone Girl. So much great detail with believable characters. -- Sue Roegge, Chapter2Books
Unforgettable twists lead to shocking revelations all the way through the epilogue * Publishers Weekly *
Readers who were enthralled by B.A. Paris's Behind Closed Doors and Gillian Flynn's Gone Girl will love the skewed psychology and shifting perspectives of this domestic thriller * Library Journal *
With shocking twists, this intricate thriller proves all is not what it seems for the discarded first wife and the woman about to marry her ex. Addictive * Woman & Home *
A scorned woman obsesses over her younger replacement . . . you may think you've heard this one before, there are surprises in store . . . fabulously twisty * Good Housekeeping *
Page-flicker . . . keeps you guessing * Prima *
Expect the unexpected. Perfect for fans of Gone Girl * Candis *
In this twisty fast-paced thriller nothing is quite as it seems. Brilliant * Sunday Mirror *

Greer Hendricks spent over two decades as an editor. Prior to her tenure in book publishing, she worked at Allure magazine and earned her master's in journalism from Columbia University. Her writing has been published in the New York Times and Publishers Weekly. Greer lives in Manhattan with her husband, two children and very needy dog, Rocky. The Wife Between Us is her first novel.

Sarah Pekkanen is the internationally and USA Today bestselling author of several novels including Skipping a Beat. A former investigative journalist and feature writer, her work has been published in The Washington Post, USA Today and many others. She is the mother of three sons and lives just outside Washington, D.C.

Greer Hendricks and Sarah Pekkanen first began working together in 2010 when Greer became Sarah's editor. The two women formed an instant connection, which grew into a close friendship and they now write New York Times bestselling psychological thrillers together.

GOR009237935
The Wife Between Us: A Richard and Judy Book Club Pick 2018 by Greer Hendricks
Greer Hendricks
Used - Very Good
Paperback
Pan Macmillan
2018-07-26
384
1509842837
9781509842834
Short-listed for Big Book Awards: Page-Turners Award 2018 (UK)
Book picture is for illustrative purposes only, actual binding, cover or edition may vary.
This is a used book - there is no escaping the fact it has been read by someone else and it will show signs of wear and previous use. Overall we expect it to be in very good condition, but if you are not entirely satisfied please get in touch with us.