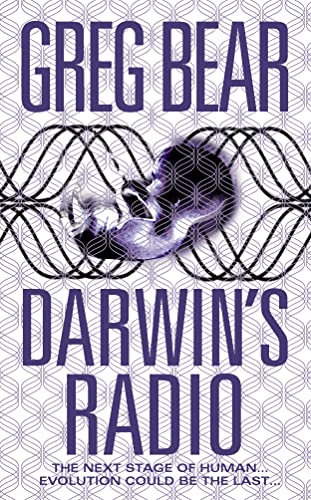 A terrifying disease, or the next step in human evolution? Three scientists must battle to find the truth in this heart-stopping technothriller.

A terrifying disease, or the next step in human evolution? Three scientists must battle to find the truth in this heart-stopping technothriller.

Mitch Rafelson makes a major discovery high in the Alps - the preserved bodies of a Neanderthal family with a human child.

Kaye Lang investigates a mass grave in the Caucasus - the bodies are mutated.

Together, these three scientists discover that so-called junk genes, dormant in our DNA for millions of years, are waking up. A signal from Darwin's radio has triggered the next step in human evolution.
The women who miscarry become inexplicably pregnant again. However, this time they are carriers of Homo sapiens novus. But there is mass panic, official denial, draconian measures against the terrible `disease'. Only Mitch, Kaye and Dicken can solve the evolutionary puzzle that will determine the future of the human race, if a future exists at all.

Greg Bear was born in 1951 and published his first short story sixteen years later. His first novel was published in 1979, and his most famous novels, Blood Music and Eon, emerged during the eighties and have now become established classics.

GOR000954318
Darwin's Radio by Greg Bear
Greg Bear
Used - Very Good
Paperback
HarperCollins Publishers
2000-03-04
448
0006511384
9780006511380
N/A
Book picture is for illustrative purposes only, actual binding, cover or edition may vary.
This is a used book - there is no escaping the fact it has been read by someone else and it will show signs of wear and previous use. Overall we expect it to be in very good condition, but if you are not entirely satisfied please get in touch with us.