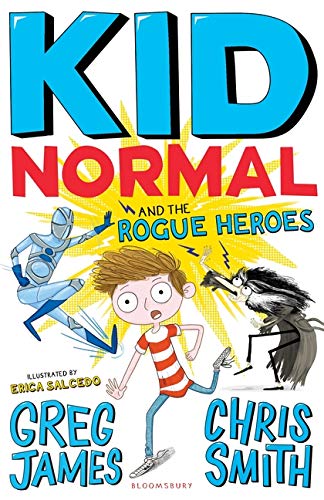 The second, epically funny adventure starring Murph Cooper and the Super Zeroes from Greg James and Chris Smith Praise for Kid Normal: 'So funny, it's almost criminal' INDEPENDENT 'Outrageous capers' GUARDIAN The first book in the Kid Normal series was shortlisted for the Waterstones Children's Book Prize 2018 Not all heroes have superpowers. Don't believe us? Well Murph Cooper is living proof. Since becoming Kid Normal, he and the Super Zeroes have been catching baddies all over the place. But being a hero is about to get a whole lot harder ... Far away in a top-secret prison, the world's most feared supervillain has broken a thirty year silence. His first words? 'Bring Kid Normal to me!'

This is such a funny book ... It's really an adventure story about an ordinary boy, a lovable hero and crazy villains! Suitable for girls or boys. Cracking read!! -- Lala, age 13 * Toppsta *
The Kid Normal books are just brilliant, Murph is a great character, so likeable and really funny. These books make you laugh out loud and are really hard to put down -- Lydib, age 11 * Toppsta *
Although this book is delightfully fun and witty, which it really is, it also has many serious elements too. I was enthralled by the plot, which has so many twists and it kept me giggling the entire time! Equally as good as the first book in the series, I could read and reread it over and over again -- Megan, age 10 * Toppsta *
PRAISE FOR KID NORMAL: 'So funny, it's almost criminal * Independent I *
An extraordinary tale about an ordinary boy in a world of heroes ... A fast-paced, humorous adventure with likeable heroes and a suitably ridiculous, evil villain * Times Educational Supplement *
Outrageous capers for eight and up ... Amusingly surreal super-powers and a trust yourself message combine to strong effect with Erica Salcedo's entertaining, huge-eyed images * Guardian *
Packed with very amusing asides, it's a fun and fast-paced read that will make James and Smith into children's heroes * Western Mail *
Chock full of slapstick humour, outrageous characters and pop culture references. It mocks school pecking orders and will make all kids who have fallen foul of them feel much better about it. And somehow, it ties all the mania together in a credible and thrilling story * The Bookbag *
A superlative adventure story that will resonate with children who like to read whacky, wild things * Books Monthly *
This spoof superhero epic certainly delivers: deliciously dastardly villains, capes, tights and mild-mannered heroes. Yet it also explores familiar school anxieties that everyone else is smarter, stronger, better * BookTrust *
A very promising start to a laugh-out-loud funny adventure series * Parents in Touch *
Incredibly funny, witty and stuffed full of heart * Book Lover Jo *

Greg James is a familiar voice and face on radio and TV. He's the host of BBC Radio 1's award-winning Drivetime show and presents the UK's Official Chart every Friday. On screen, Greg has hosted a variety of shows, most recently seen fronting BBC Children in Need. He is also the face of BT Sport's cricket coverage and in 2016 he raised over a million pounds for Sport Relief by completing five triathlons in five cities in five days. Greg has no superpowers. In his spare time he enjoys the idea of having hobbies. But in reality, he's made all of them into work. @gregjames Chris Smith is an award-winning journalist and broadcaster who delivers the news to millions of people every day as the presenter of Newsbeat on BBC Radio 1. Chris enjoyed a previous glittering literary career as the winner of the H.E. Bates Short Story Competition 1981 (under tens category) with his tale 'Where Are the Brandy Snaps?'. Chris has no superpowers either, although he enjoys pretending his cat Mabel can fly by picking her up and running around. @itschrissmith Greg and Chris first started coming up with ideas for ludicrous characters and stories together on their weekly podcast, and they haven't stopped since. kidnormal.com Illustrator Erica Salcedo studied Fine Art at Castilla-La Mancha University, before going on to study for a masters in Graphic Design. She uses a mixture of techniques to create her illustrations - from hand-drawing to digital manipulation - and always remembers to add a pinch of humour. Wolfish Stew (Bloomsbury), written by Suzi Moore, was Erica's first picture book. She lives in Cuenca, Spain.

GOR009095142
Kid Normal and the Rogue Heroes: Kid Normal 2 by Greg James
Greg James
Kid Normal
Used - Like New
Paperback
Bloomsbury Publishing PLC
2018-03-22
416
1408884550
9781408884553
N/A
Book picture is for illustrative purposes only, actual binding, cover or edition may vary.
This is a used book - there is no escaping the fact it has been read by someone else and it will show signs of wear and previous use. Overall we expect it to be in very good condition, but if you are not entirely satisfied please get in touch with us.