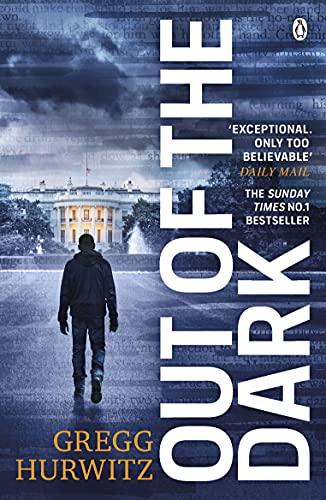 Out of the Dark
by Gregg Hurwitz

Out of the Dark Summary

Out of the Dark: The gripping Sunday Times bestselling thriller by Gregg Hurwitz

The president is the greatest threat to his country.

You can prove it.

He is a traitor.

You know his secret.

The President must die. . .

But how do you kill the most powerful man in the world?

Breathtakingly bold, brilliantly accomplished and blisteringly fast-paced, Out of the Dark is the stunning new thriller from the No. 1 Sunday Times bestselling author of Orphan X.
__________

'Gripping, powerful and only too believable. Don't miss it' Daily Mail

'Outstanding in every way' Lee Child

'Blows the doors off most thrillers I've read. Read this book - you will thank me later' David Baldacci

Customer Reviews - Out of the Dark

Out of the Dark Reviews

Even more compelling than its predecessors. Hurwitz uses every ounce of his exceptional skill to describe the elaborate plans that exist to protect the most powerful man in the world and how they might be circumvented. Gripping, powerful and only too believable. Don't miss it. * Daily Mail *
Out of the Dark takes the reader on a journey that covers a wide range of emotions from potential love to outright terror. The relentless action and detailed mission planning make the tale both clever and smart. It's only the end of January, but this novel will be remembered as one of the best thrillers of the year * Associated Press *
Out of the Dark is the best thing Gregg Hurwitz has ever written and the kind of game-changing thriller that'll have people talking about it long after turning the final page. * The Real Book Spy *
The perfect thriller * Robert Crais, bestselling author of Cole & Pike series *
A superbly created page-turning action blast * Peterborough Evening Telegraph *
The fourth in a series that has put Hurwitz firmly on the thriller writers' map * Mail on Sunday *
Praise for Orphan X: * - *
Orphan X blows the doors off most thrillers I've read and catapults the readers on a cat-and-mouse that feels like a missile launch. Read this book. You will thank me later -- David Baldacci
Orphan X is his best yet - a real celebration of all the strengths Gregg Hurwitz brings to a thriller -- Lee Child
Orphan X is the most gripping, high-octane thriller I've read in a long, long time! -- Tess Gerritsen
Orphan X is most exciting new series character since Jack Reacher. A page-turning masterpiece of suspense -- Jonathan Kellerman
Mind blowing! A perfect mix of Jason Bourne and Jack Reacher -- Lisa Gardner
Orphan X is the most exciting thriller I've read since The Bourne Identity ... A new thriller superstar is born! -- Robert Crais
Orphan X is not good. Orphan X is great. Whatever you like best in a thriller - action, plot, character, suspense - Orphan X has it -- Simon Toyne
A new series character to rival Reacher . . . anyone reading Orphan X won't be surprised that a cadre of peers, from Tess Gerritsen to Lee Child, have lined up to praise it * Independent *
Bestseller Hurwitz melds non-stop action and high-tech gadgetry with an acute character study in this excellent series opener . . . Evan Smoak is an electrifying character * Publishers Weekly *
In terms of plot, characters, suspense and innovation, Orphan X is outstanding . . . I've always thought that one reason for Tom Clancy's success was the endless detail he provided about military hardware, and that the James Bond novels benefited from the loving attention Ian Fleming devoted to the martinis, expensive cars and gorgeous women he so admired. Hurwitz outdoes both writers . . . Orphan X is a smart, stylish, state-of-the-art thriller. It's also the start of a series, one that might give Lee Child's Jack Reacher books a run for their money * WASHINGTON POST *
A masterpiece of suspense and thrills . . . Turn off the real world and dive into this amazing start to a new series * Associated Press *

Gregg Hurwitz is the Sunday Times bestselling author of Orphan X and The Nowhere Man, the first Evan Smoak novels. He is also the author of You're Next, The Survivor, Tell No Lies and Don't Look Back. A graduate of Harvard and Oxford universities, he lives with his family in LA, where he also writes for the screen, TV and comics.

GOR009888370
Out of the Dark: The gripping Sunday Times bestselling thriller by Gregg Hurwitz
Gregg Hurwitz
An Orphan X Thriller
Used - Very Good
Paperback
Penguin Books Ltd
2019-07-25
512
1405928565
9781405928564
N/A
Book picture is for illustrative purposes only, actual binding, cover or edition may vary.
This is a used book - there is no escaping the fact it has been read by someone else and it will show signs of wear and previous use. Overall we expect it to be in very good condition, but if you are not entirely satisfied please get in touch with us.