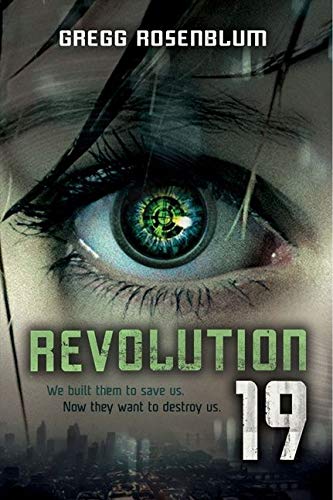 From the creators of Homeland and the Final Destination films, Revolution 19 is a cinematic thriller unlike anything else.

At first they called it system-wide malfunctions when the robots stopped fighting at exactly 2:15 p.m. Greenwich Mean Time, August 17, 2051.

From the creators of Homeland and the Final Destination films, Revolution 19 is a cinematic thriller unlike anything else. At first they called it system-wide malfunctions when the robots stopped fighting at exactly 2:15 p.m. Greenwich Mean Time, August 17, 2051. For twenty-two hours the battlefields were silent. Then when the bots began killing again, now targeting their human commanders, they shook their heads and called it fatal programming errors. When, a day later, the skies over cities on six continents grew dark with warships, they began to understand. And when the bombs rained down and legions of bot foot soldiers marched into the burning ruins, killing any humans who resisted and dragging away the rest, they finally called it what it was: revolution. Only a few escaped the robot war. Those who did lived in secret freeposts, hiding from the robot armies determined to control the human race. Nick, Kevin, and Cass are some of the lucky ones-they live with their parents in a secret human community outside the robot-controlled Cities. But when the bots discover their village and attack, the teens are forced to run. Determined to find out if their parents are alive, the three siblings venture into the heart of the robot City, where one misstep could be their last.

An exciting, dystopian page turner...Robot apocalypse done right -- Kirkus Reviews Good old-fashioned sci-fi action starring remorseless laser-firing robots and ridiculously brave and selfless teenagers. -- Booklist "A strong start to what looks to be an exciting series." -- Publishers Weekly "Very entertaining, with an action-packed story that suggests a cinematic blockbuster. Readers looking for a lively adventure through a dystopian future that isn't hopelessly bleak may therefore get on board for this revolution and relish its obvious set-ups for a sequel." -- Bulletin of the Center for Children's Books "Fast paced and entertaining" -- School Library Journal

Gregg Rosenblum works at Harvard, where he wages epic battles against technology as an editor/webmaster/communications/quasi-IT guy. He graduated from UC San Diego and has an MFA in creative writing from Emerson College. He lives in Boston with his wife and daughter.

GOR008610844
Revolution 19 by Gregg Rosenblum
Gregg Rosenblum
Revolution 19
Used - Good
Paperback
HarperCollins Publishers Inc
2014-01-30
288
0062125966
9780062125965
N/A
Book picture is for illustrative purposes only, actual binding, cover or edition may vary.
This is a used book - there is no escaping the fact it has been read by someone else and it will show signs of wear and previous use. Overall we expect it to be in very good condition, but if you are not entirely satisfied please get in touch with us.