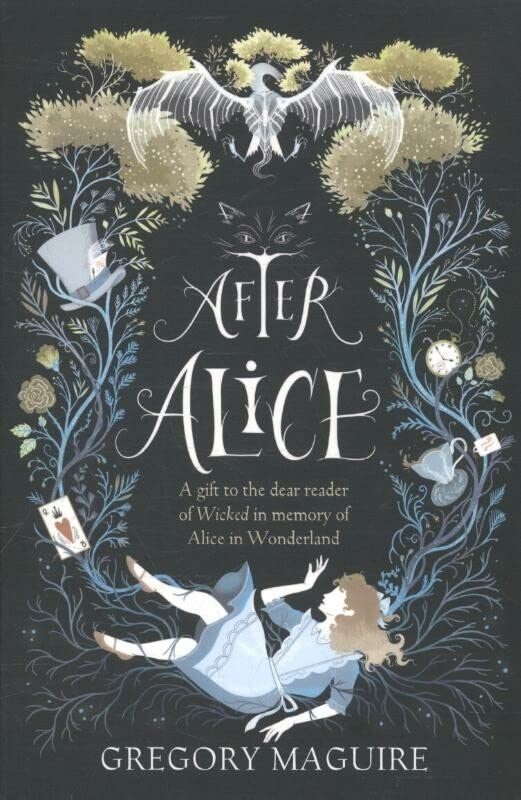 After Alice
by Gregory Maguire

Used Price
£4.99
New RRP £9.99
Free Shipping in the UK
What happened to those left behind when Alice went to Wonderland?
Reviews:
Trustpilot
Like New Very Good Good

After Alice by Gregory Maguire

After Alice by Gregory Maguire, the bestselling author of WICKED, is a wonderful retelling of what happened next after Alice disappeared down the rabbit hole. An entertaining spin on Lewis Caroll's classic tale of Alice in Wonderland, this novel will delight fans of Angela Carter.

When Alice fell down the rabbit-hole, she found Wonderland as rife with inconsistent rules and abrasive egos as the world she left behind. But how did Victorian Oxford react to Alice's disappearance?

Gregory Maguire turns his imagination to the question of underworlds, undergrounds, underpinnings -and understandings old and new, offering an inventive spin on Carroll's enduring tale. Ada, a friend mentioned briefly in Alice's Adventures in Wonderland, sets out to visit Alice but, arriving a moment too late, tumbles down the rabbit-hole herself.

Ada brings to Wonderland her own imperfect apprehension of cause and effect as she embarks on an odyssey to find Alice and bring her safely home from this surreal world below the world. The White Rabbit, the Cheshire Cat and the bloodthirsty Queen of Hearts interrupt their mad tea party to suggest a conundrum: if Eurydice can ever be returned to the arms of Orpheus, or if Lazarus can be raised from the tomb, perhaps Alice can be returned to life.

Either way, everything that happens next is After Alice.

Thoughtful and disconcertingly memorable... This is a feast for the mind, and readers will ruminate on it long after turning the last page * Publishers Weekly (starred review) *
Maguire effortlessly leaps between the absurd illusions of Wonderland and the building suspense of the search for the children in antique Oxford... [He] closes in on some big, haunting ideas himself, about the loss of loved ones and religious faith, about cultural and romantic subjugations, and about the evolutionary value of imagination... [A] harvest of delightfully stated observations, [confronting] weighty themes with a light touch and exquisite, lovely language. [Maguire's] playful vocabulary may be -Carroll-esque, but his keen wit is closer to Monty Python, with a fine, unforced sense of play... his erudition is a joy, his sense of fun infectious * New York Times Book Review *
A refreshing look at such a well-known and loved classic * WordsOfaPaige *

Gregory Maguire is a bestselling author who has earned rave reviews and a dedicated following for Wicked, the first novel in the Wicked Years quartet (which also included Son of a Witch, A Lion Among Men and Out of Oz), that was made into an award-winning musical. He received his doctorate in English Literature from Tufts University, and has taught at Simmons College and other Boston area colleges. He has also served as an artist-in-residence at the Blue Mountain Center, the Isabella Stewart Gardner Museum and the Hambridge Center. Gregory has lived in Dublin and London, but now makes his home near Boston, Massachusetts, with his partner, their two sons and daughter.

GOR007827921
After Alice by Gregory Maguire
Gregory Maguire
Used - Like New
Paperback
Headline Publishing Group
2016-07-05
256
1472230469
9781472230461
N/A
Book picture is for illustrative purposes only, actual binding, cover or edition may vary.
This is a used book - there is no escaping the fact it has been read by someone else and it will show signs of wear and previous use. Overall we expect it to be in very good condition, but if you are not entirely satisfied please get in touch with us.