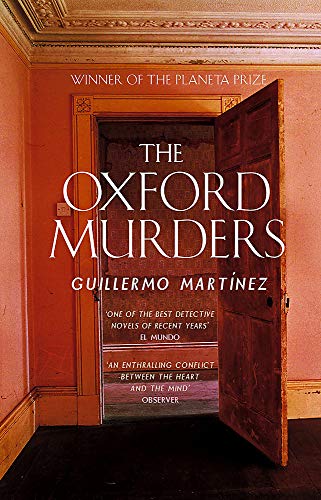 The Oxford Murders
by Guillermo Martinez

In Stock
£3.99
* A compelling and sophisticated crime novel in the tradition of award-winning Jose Carlos Somoza. * Using rules and axioms, there will always be some propositions that can't be proved either true or false... But can this apply to murder?
Very Good Good
5 in stock

The Oxford Murders by Guillermo Martinez

On a balmy summer's day in Oxford an old lady who once helped decipher the Enigma Code is killed. After receiving a cryptic anonymous note containing only the address and the symbol of a circle, Arthur Seldom, a leading mathematician, arrives to find the body.

Then follow more murders - an elderly man on a life-support machine is found dead with needle marks in this throat; the percussionist of an orchestra at a concert at Blenheim Palace dies before the audience's very eyes - seemingly unconnected except for notes appearing in the maths department, for the attention of Seldom. Why is he being targeted as the recipient of these coded messages? All he can conjecture is that it might relate to his latest book, an unexpected bestseller about serial killers and the parallels between investigations into their crimes and certain mathematical theorems.
It is left to Seldom and a postgraduate mathematics student to work out the key to the series of symbols before the killer strikes again.

Unusual blend of murder most foul and mathematics most pure ... a playful intellectual exercise * DAILY MAIL *
An intellectual thriller that can be much enjoyed even by those whose grasp of mathematics is limited * THE TIMES *
If you like your detective stories gore-free, with a strong crossword-solving element, this is for you * THE TIMES *
The plot rattles along ... pausing occasionally to fill the reader in with a bit of necessary theoretical background'. LONDON REVIEW OF BOOKS * 'Well crafted and deeply entertaining.' *

Guillermo Martinez was born in Bahia Blanca, Argentina, in 1962. Since 1985 he has lived in Buenos Aires, where he obtained a Ph.D. in Mathematical Science. He has written several highly acclaimed novels and books of short stories. The Oxford Murders, which was awarded the prestigious Planeta prize, is the first of his works to be published in English..

GOR000371754
The Oxford Murders by Guillermo Martinez
Guillermo Martinez
Used - Very Good
Paperback
Little, Brown Book Group
2006-01-05
208
0349117233
9780349117232
N/A
Book picture is for illustrative purposes only, actual binding, cover or edition may vary.
This is a used book - there is no escaping the fact it has been read by someone else and it will show signs of wear and previous use. Overall we expect it to be in very good condition, but if you are not entirely satisfied please get in touch with us.