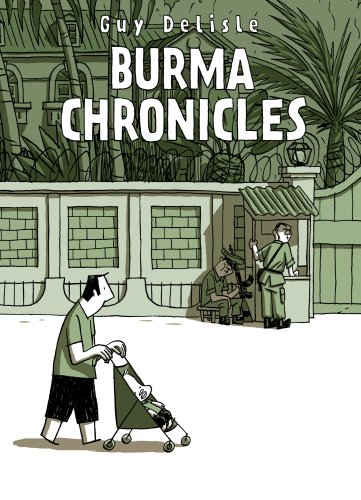 In Stock
£7.49
Guy Delisle's newest travelogue revolves around a year spent in Burma (also known as Myanmar) with his wife and son.
Very Good
Only 1 left

Guy Delisle's newest travelogue revolves around a year spent in Burma (also known as Myanmar) with his wife and son. Burma is notorious for its use of concealment and isolation as social control: where scissor-wielding censors monitor the papers, the de facto leader of the opposition has been under decade-long house arrest, insurgent-controlled regions are effectively cut off from the world, and rumour is the most reliable source of current information. An impressive and moving work of comics journalism from the author of Pyongyang and Shenzen.

"It's insightful and is able to carry the weight of Burma's troublesome history, enabling the reader to learn about the real lives of Burmese people, through a mix of current affairs and, surprisingly considering the subject, humour." -- Emma Henderson * Independent *
"Simply put, Burma Chronicles is the most enlightening and insightful book on Burma in years... If you must visit Burma while it remains under the rule of the iniquitous junta, do so with the express intention of bearing witness to the tragedy and suffering of its people. Better still, stay away, and visit it instead through the pages of this heartbreaking, educational and insightful comic masterpiece" * Guardian *
"As a counterpoint to the often inaccessible news stories about the country, this is an excellent portrait of a little-understood land, and makes for a deeply original and fascinating piece of travel writing" * Daily Telegraph *
"Hilarious and touching" * Dazed *
"This book is more fun than most holidays and more enlightening than a hundred blogs by self-appointed experience censors" * Time Out *

Guy Delisle was born in Quebec City, Canada. His bestselling and acclaimed travelogues (Pyongyang, Jerusalem: Chronicles from the Holy City, Burma Chronicles, and Shenzhen) are defining works of graphic nonfiction, and in 2012, Delisle was awarded the top prize in European cartooning when the French edition of Jerusalem was named Best Album at the Angouleme International Comics Festival. He lives in France with his wife and children.

GOR004747256
Burma Chronicles by Guy Delisle
Guy Delisle
Used - Very Good
Paperback
Vintage Publishing
2011-09-08
272
0224096184
9780224096188
N/A
Book picture is for illustrative purposes only, actual binding, cover or edition may vary.
This is a used book - there is no escaping the fact it has been read by someone else and it will show signs of wear and previous use. Overall we expect it to be in very good condition, but if you are not entirely satisfied please get in touch with us.