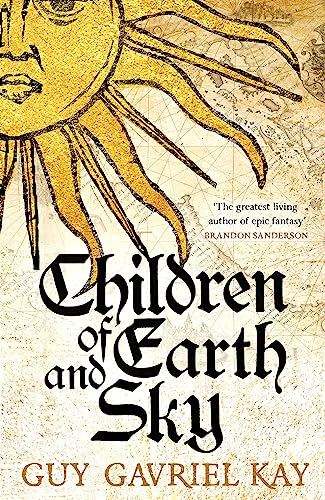 Children of Earth and Sky
by Guy Gavriel Kay

Children of Earth and Sky Summary

Children of Earth and Sky by Guy Gavriel Kay

Guy Gavriel Kay, bestselling author of the groundbreaking novels Under Heaven and River of Stars, once again visits a world that evokes one that existed in our own past, this time the tumultuous period of Renaissance Europe - a world on the verge of war, where ordinary lives play out in the grand scheme of kingdoms colliding.

From the small coastal town of Senjan, notorious for its pirates , a young woman sets out to find vengeance for her lost family. That same spring, from the wealthy city-state of Seressa, famous for its canals and lagoon, come two very different people: a young artist traveling to the dangerous east to paint the Grand Khalif at his request - and possibly to do more - and a fiercely intelligent, angry woman, posing as a doctor's wife in her role of a spy.

The trading ship that carries them is commanded by the clever younger son of a merchant family - with ambivalence about the life he's been born to live. And farther east a boy trains to become a soldier in the elite infantry of the khalif - to win glory in the war everyone knows is coming.

As these lives entwine, their fates-and those of many others - will hang in the balance, when the khalif sends out his massive army to take the great fortress that is the gateway to the western world . . .

Children of Earth and Sky Reviews

Guy Gavriel Kay has a wonderful talent. He tells stories in an invented world that is so rich in historical echoes that I found myself smiling with pleasure as I heard the echoes, while engrossed in the story. Warmly recommended. -- Edward Rutherfurd, author of Sarum
Kay triumphs at creating complex political landscapes and then populating them with characters who make the stakes important and the struggles real. Another magnificent -history-that-never-was from a master. * Library Journal, *starred review* *
The greatest living author of epic fantasy -- Brandon Sanderson
[Kay] wields plots and all-too-human characters brilliantly, in a world where nothing is as valuable as information. This big, powerful fantasy offers an intricately detailed setting, marvelously believable characters, and an international stew of cultural and religious conflict writ larger than large. * Publishers Weekly *
Its power derives less from its tweaking of history than from its complex, nuanced characters whose stories come to intertwine in revealing ways . . . Kay has a remarkable gift for lending surprising depth to even walk-on figures. * Locus *
As with all of Kay's novels, the lush historical tapestry serves principally as background for compelling, sympathetic characters whose stories gradually weave together in ingenious ways. * Chicago Tribune *
Kay is in masterful control of his material, and the prose is elegant. This is writing of the highest order. Very highly recommended. * Historical Novel Society *
An intriguing, complicated blend of pitch-perfect characters doing the best they can, in a well-realised parallel history, and occasionally changing the world. I couldn't put it down, and in that spirit, I highly recommend that you pick it up. * sfandfreviews.blogspot.co.uk/ *
I finished this one earlier today. The year is young, but Kay's latest could well be the best speculative fiction read of 2016! * fantasyhotlist.blogspot.co.uk *
Children of Earth and Sky is Guy Gavriel Kay doing what he does best, and better than anyone else working in fantasy today: telling the story of empires and wars through the lens of characters so vivid and convincing that they feel real, and absorbing you into their lives. * thewertzone.blogspot.com/ *
Everything about this book, from the characters to the world created - including the subtle elements of fantasy that imbue it - makesCHILDREN OF EARTH AND SKY a wonder and a joy to read. * http://blogcritics.org/ *
one of the few truly philosophical fantasists writing today. Like his other novels set in a history just a few degrees off from our own, Children of Earth and Sky is a superbly entertaining, profoundly moral, & politically astute, novel. * www.eclecticruckus.wordpress.com *
Richly rewarding * Daily Mail *
One of the best fantasy novels I have read. -- Anne NMcCaffery on TIGANA
Kay shows why he's the heir to Tolkien's tradition' Booklist 'A richly sensuous fantasy world, full of evocative history, religions, folklore, local customs, and a magical rites...a bravura performance, nearly impossible to put dowN. * Kirkus on TIGANA *
Kay has delievered such a magnificent conclusion - I can't praise it enough. THE FIONAVAR TAPESTRY will be read and reread for many years to com' Fantasy Review 'Packed with action' The Times 'A brilliant and complex portrayal of good and evil. * Publishers Weekly *

Guy Gavriel Kay has published 13 novels which have been translated into 30 languages and have appeared on bestseller lists around the world. He is also the author of the acclaimed poetry collection, Beyond This Dark House. His most recent work is Children of Earth and Sky. Before beginning his career as a novelist, Kay was retained by the Estate of J.R.R. Tolkien to assist in the editorial construction of The Silmarillion, the first and best-known of the posthumously published Tolkien works. Called to the Bar of Ontario in 1980, he has also been principal writer and associate producer for the CBC's award-winning crime-drama series, The Scales of Justice. Kay has twice won the Aurora Award, is a multiple World Fantasy Award nominee, and won that award in 2008 for Ysabel. He has also won France's Prix Elbakin for both Under Heaven and River of Stars, and is the recipient of the International Goliardos Prize, presented in Mexico City, for his contributions to the literature of the fantastic.

GOR010244049
Children of Earth and Sky by Guy Gavriel Kay
Guy Gavriel Kay
Used - Like New
Paperback
Hodder & Stoughton
2017-05-04
592
147362813X
9781473628137
N/A
Book picture is for illustrative purposes only, actual binding, cover or edition may vary.
The book has been read, but looks new. The book cover has no visible wear, and the dust jacket is included if applicable. No missing or damaged pages, no tears, possible very minimal creasing, no underlining or highlighting of text, and no writing in the margins.