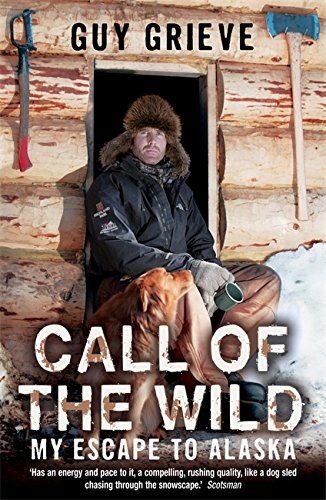 Call of the Wild
by Guy Grieve

In Stock
£6.49
From office drone to Grizzly Adams - one man's extraordinary year alone in the Alaskan wilderness
Very Good Good
10 in stock

Call of the Wild Summary

Call of the Wild: My Escape to Alaska by Guy Grieve

Guy Grieve's life was going nowhere - trapped in a job he hated, commuting 2,000 miles a month and up to his neck in debt. But he dreamed of escaping it all to live alone in one of the wildest, most remote places on earth - Alaska.

And just when he'd given up hope, the dream came true. Suddenly Guy was thrown into one of the harshest environments in the world, miles from the nearest human being and armed with only the most basic equipment. And he soon found - whether building a log cabin from scratch, hunting, ice fishing or of course dodging bears in the buff - that life in the wilderness was anything but easy...

Part Ray Mears, part Bill Bryson, CALL OF THE WILD is the gripping story of how a mild-mannered commuter struggled with the elements - and himself - and eventually learned the ways of the wild.

Call of the Wild Reviews

'Guy Grieve jacked in his desk job to spend a year alone in the Alaskan wilderness. With only moose, bears and wolves for company, he survived freezing temperatures, built a log cabin, learned to hunt and handle a dog team and had several brushes with death.' * Metro *
'The book captures Grieve's maverick adventure, and has an energy and pace to it, a compelling, rushing quality, like a dog sled chasing through the snowscape . . . also has a real flavour of the frontier, told by a man who shoots a hole in his roof for a chimney with his shotgun, and puts a recipe for beaver ribs and pea soup in the end notes. CALL OF THE WILD may be the perfect present to give your dreamy spouse for Christmas, but you risk him stealing out of the house at 2am with his snowshoes on. One awaits his next adventure with anticipation.' * Scotsman *
'Hilarious' * Daily Mail *
'A wild adventure' * Independent *

Guy Grieve gave up his job in sales and marketing to spend a year alone in the Alaskan wilderness. He has written for the Scotsman and he currently lives on the Isle of Mull with his wife and two sons.

GOR001172529
Call of the Wild: My Escape to Alaska by Guy Grieve
Guy Grieve
Used - Very Good
Paperback
Hodder & Stoughton General Division
2007-03-08
400
0340898259
9780340898253
N/A
Book picture is for illustrative purposes only, actual binding, cover or edition may vary.
This is a used book - there is no escaping the fact it has been read by someone else and it will show signs of wear and previous use. Overall we expect it to be in very good condition, but if you are not entirely satisfied please get in touch with us.