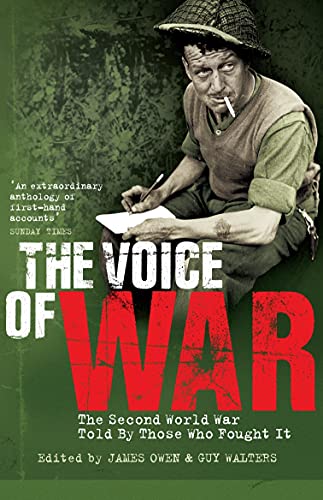 The Voice of War
by Guy Walters

In Stock
£4.49
The end of the Second World War retains its unique place in the public consciousness. Drawn from the diaries and memoirs of soldiers and observers from every theatre of war and from every nation who was involved this great book gives an enthralling panoramic view of a world at war.
Very Good
Only 3 left

The Voice of War Summary

The Voice of War: The Second World War Told by Those Who Fought It by Guy Walters

The Second World War was the first truly global conflict and sixty years on its consequences continue to shape the modern world. Season by season The Voice of War charts the course of the central event of the twentieth century using the diaries, letters and memoirs of those who were there, from Russian women fighter pilots to the prisoners of the Japanese to Londoners enduring the Blitz. Their first-hand accounts place us on the ramparts of Colditz, in the hiding places of the Warsaw Ghetto, aboard a dive bomber at Pearl Harbor, with Rommel in the desert and by Churchill's side in Downing Street. Unrivalled in the immediacy, range and power of the experiences it contains, it includes writing by, among others, Joseph Goebbels, Benito Mussolini, Christabel Bielenberg, Noel Coward, Robert Capa, Airey Neave, George Patton, Hermione Ranfurly, Arthur Koestler, James Lees-Milne, Martha Gellhorn, Sophia Loren and Primo Levi. Ambitious, instructive and entertaining, this is the definitive portrait of a world at war.

James Owen was latterly acting editor of The Daily Telegraph Obituaries page and now writes regularly for the Financial Times and Conde Naste Traveller. He is also contributing editor to The New Dictionary of National Biography. He is presently working on his first book, a study of colonial life during WWII.
A former journalist on The Times, Guy Walters is the author of The Traitor, a thriller set during the Second World War which was published in 2002. His second book The Leader was published in Spring 2004.

GOR001132888
The Voice of War: The Second World War Told by Those Who Fought It by Guy Walters
Guy Walters
Used - Very Good
Paperback
Penguin Books Ltd
2005-05-05
656
0141012676
9780141012674
N/A
Book picture is for illustrative purposes only, actual binding, cover or edition may vary.
This is a used book - there is no escaping the fact it has been read by someone else and it will show signs of wear and previous use. Overall we expect it to be in very good condition, but if you are not entirely satisfied please get in touch with us.