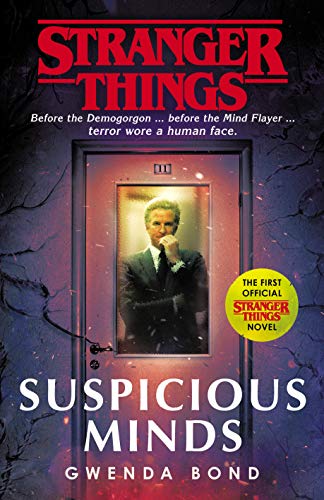 A mysterious lab. A sinister scientist. A secret history. If you think you know the truth about Eleven's mother, prepare to have your mind turned Upside Down.

It's the summer of 1969. The world is changing, and Terry Ives isn't content to watch from the sidelines. When word gets around about an important government experiment, she signs on as a test subject.

But behind the walls of Hawkins National Laboratory - and the piercing gaze of its director, Dr Martin Brenner - lurks a dark conspiracy. To face it, she'll need the help of her fellow test subjects, including a mysterious young girl with unexplainable powers. . .
_____________________________

'Suspicious Minds is the prequel story that fans have been waiting for.' - Kirkus Reviews

Suspicious Minds is the prequel story that fans have been waiting for. * Kirkus Reviews *
A pacey, creepy book that does what any good prequel should: enhance the story it precedes... this is unmistakably Stranger Things... packs an emotional punch * SFX Magazine *
The novel's set-up is sublime! Fans of the show will no doubt enjoy it - I certainly did. * Den of Geek *
You're left hungry for more, but in the best way possible, as the book manages the balancing act between interconnected prequel and standalone story. * Cinelinx *
Guaranteed to satisfy your craving for new Hawkins material even better than a box of Eggos. * The Mary Sue *

Gwenda Bond writes YA and children's fiction, among other things. Her novels include the Lois Lane series (Fallout, Double Down, Triple Threat), which brings the iconic comic book character front and center, and the Cirque American series (Girl on a Wire, Girl Over Paris, Girl in the Shadows), about daredevil heroines who discover magic and mystery lurking under the big top. She and her husband, Christopher Rowe, also co-write a middle grade series, the Supernormal Sleuthing Service.

Her nonfiction writing has appeared in the Los Angeles Times, Publishers Weekly, Locus, and many other publications. She has an MFA in writing from the Vermont College of Fine Arts. She lives in a hundred-year-old house in Lexington, Kentucky, with her husband and their unruly pets. There are rumors she escaped from a screwball comedy, and she might have a journalism degree because of her childhood love of Lois Lane.

GOR010136640
Stranger Things: Suspicious Minds: The First Official Novel by Gwenda Bond
Gwenda Bond
Used - Like New
Paperback
Cornerstone
2019-06-13
336
1787462021
9781787462021
N/A
Book picture is for illustrative purposes only, actual binding, cover or edition may vary.
The book has been read, but looks new. The book cover has no visible wear, and the dust jacket is included if applicable. No missing or damaged pages, no tears, possible very minimal creasing, no underlining or highlighting of text, and no writing in the margins.