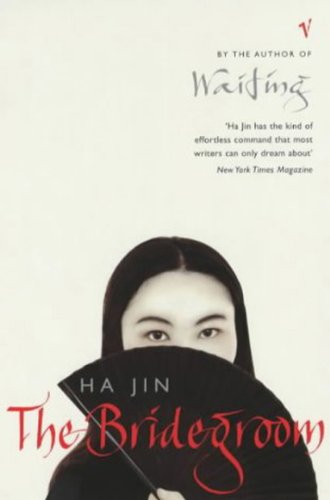 The Bridegroom
by Ha Jin

In Stock
£3.99
This new collection of short stories by the award-winning author of Waiting confirms Ha Jin's reputation as a master storyteller, as well as a master of the miniature.
Very Good
Only 4 left

The Bridegroom by Ha Jin

This new collection of short stories by the award-winning author of Waiting confirms Ha Jin's reputation as a master storyteller, as well as a master of the miniature. In The Bridegroom, the twelve stories capture a China in transition, moving from Maoism towards a more open society. For these men and women, starting to feel the influence of the West, the daily dramas of a system that still struggles to control their every move and thought are made all the more painful. As his characters, from an entrepreneur, transformed from black-market criminal to free market hero, to the workers at Cowboy Chicken, to the professor mistaken by the police for a saboteur, continue to struggle against petty injustices and heartbreaks, Ha Jin celebrates their lives and humanity with the understated humour and simplicity that has won him widespread acclaim.

"Ha Jin has the kind of effortless command that most writers can only dream about" * New York Times Magazine *
"Ha Jin's eye for detail, his great storytelling talent, suffuse his work and make The Bridegroom a genuine pleasure" * New York Times Book Review *
"Beautifully understated short stories-Some of them are likely to break your heart" * People Magazine *
"A genuine pleasure" * New York Times Book Review *
"The Bridegroom...showcases [Ha Jin's] mastery of craft, the consummate restraint and nearly telegraphic objectivity with which he paints difficult truths" * Boston Globe *

Ha Jin left his native China in 1985 for the States. He is a poet and author of two novels, Waiting (which won the US National Book Award and the PEN/Faulkner Award in 1999), and In the Pond, and two previous collections of stories, Ocean of Words (which won the PEN/Hemingway Award in 1997), and Under the Red Flag. He lives near Atlanta, where teaches English at Emory University.

GOR003635736
The Bridegroom by Ha Jin
Ha Jin
Used - Very Good
Paperback
Vintage Publishing
2001-10-04
240
0099422174
9780099422174
N/A
Book picture is for illustrative purposes only, actual binding, cover or edition may vary.
This is a used book - there is no escaping the fact it has been read by someone else and it will show signs of wear and previous use. Overall we expect it to be in very good condition, but if you are not entirely satisfied please get in touch with us.