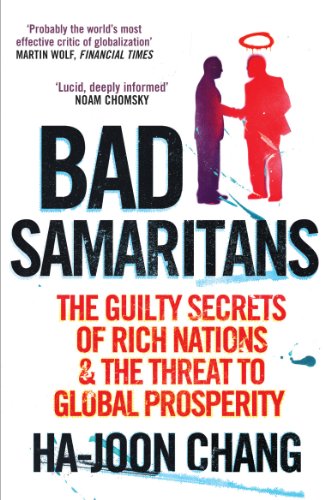 It's rare that a book appears with a fresh perspective on world affairs, but renowned economist Ha-Joon Chang has some startlingly original things to say about the future of globalization.

Bad Samaritans: The Guilty Secrets of Rich Nations and the Threat to Global Prosperity by Ha-Joon Chang

It's rare that a book appears with a fresh perspective on world affairs, but renowned economist Ha-Joon Chang has some startlingly original things to say about the future of globalization. In theory, he argues, the world's wealthiest countries and supra-national institutions like the IMF, World Bank and WTO want to see all nations developing into modern industrial societies. In practice, though, those at the top are 'kicking away the ladder' to wealth that they themselves climbed.

Why? Self-interest certainly plays a part. But, more often, rich and powerful governments and institutions are actually being 'Bad Samaritans': their intentions are worthy but their simplistic free-market ideology and poor understanding of history leads them to inflict policy errors on others. Chang demonstrates this by contrasting the route to success of economically vibrant countries with the very different route now being dictated to the world's poorer nations. In the course of this, he shows just how muddled the thinking is in such key areas as trade and foreign investment. He shows that the case for privatisation and against state involvement is far from proven. And he explores the ways in which attitudes to national cultures and political ideologies are obscuring clear thinking and creating bad policy. Finally, he argues the case for new strategies for a more prosperous world that may appall the 'Bad Samaritans'.

A smart, lively and provocative book that offers us compelling new ways to look at globalization

-- Joseph E. Stiglitz, Nobel laureate in Economics, 2001
Every orthodoxy needs effective critics. Ha-Joon Chang is probably the world's most effective critic of globalization. He does not deny the benefits to developing countries of integration into the world economy. But he draws on the lessons of history to argue that they must be allowed to integrate on their own terms -- Martin Wolf, Financial Times, author of 'Why Globalization Works'
This is a marvellous book. Well researched, panoramic in its scope and beautifully written, Bad Samaritans, is the perfect riposte to devotees of a one-size-fits-all model of growth and globalization. I strongly urge you to read it -- Larry Elliott, Economics Editor, Guardian
In this more polemical tract, [Chang] adds the spark of personal reflection ... and some mischievous rhetorical set-pieces. * The Economist *
This is an excellent book...deploys the logical discipline of economics and its engagement with quantitative evidence, but does so in jargon-free prose that sparkles with anecdotes and practical observations. * International Affairs *

Ha-Joon Chang is a Cambridge economist who, for the past two decades, has taught and researched issues related to economic development and globalisation. He has also worked as a consultant for the World Bank, the Asian Development Bank, various UN agencies and for the governments of Brazil, Canada, Japan, South Africa, the UK, and Venezuela. He has published numerous articles and books, including Kicking Away the Ladder - Development Strategy in Historical Perspective, which won the 2003 Myrdal Prize and has been translated into seven languages . In 2005, he and Richard Nelson of Columbia University received the Leontief Prize. He has been on the editorial board of the Cambridge Journal of Economics since 1992.

GOR001918076
Bad Samaritans: The Guilty Secrets of Rich Nations and the Threat to Global Prosperity by Ha-Joon Chang
Ha-Joon Chang
Used - Very Good
Paperback
Cornerstone
2008-05-01
288
1905211376
9781905211371
N/A
Book picture is for illustrative purposes only, actual binding, cover or edition may vary.
This is a used book - there is no escaping the fact it has been read by someone else and it will show signs of wear and previous use. Overall we expect it to be in very good condition, but if you are not entirely satisfied please get in touch with us.