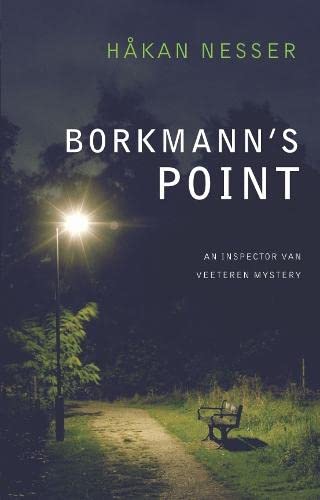 Borkmann's rule was hardly a rule; in fact, it was more of a comment, a landmark for tricky cases . . .

In every investigation, he maintained, there comes a point beyond which we don't really need any more information. When we reach that point, we already know enough to solve the case by means of nothing more than some decent thinking. In his memoirs, Borkmann went so far as to claim that it was precisely this ability, or the lack of it, which distinguishes a good detective from a bad one.

A wealthy real-estate mogul is brutally murdered with an axe in the quiet coastal town of Kaalbringen, apparently the second victim of a serial killer. Chief Inspector van Veeteren, bored of his holiday nearby, is summoned to assist the local authorities. But as the investigation proceeds there seems to be nothing to link the mogul with the first victim, a seedy ex-con.

Another body is discovered, again with no apparent connection to the others, and the pressure mounts. The local police chief, just days away from retirement, is determined to wrap things up before he goes. Then there's a fourth murder, and a brilliant young female detective goes missing - perhaps she has reached Borkmann's Point before anyone else . . .

This riveting novel, full of fascinating, quirky characters and vivid settings, introduces the chess-playing Inspector van Veeteren - a detective already beloved by his European readership - and marks the UK debut of Hakan Nesser, a chilling new voice in crime fiction.

'On this showing, Inspector Van Veeteren seems destined for a place amongst the great European detectives' Colin Dexter, creator of Inspector Morse

"Nesser has a penetrating eye for the skull beneath the skin." --"The New York Times" "The [murderer's] identity comes as a terrific surprise. [Nesser] knows how to write great endings."-"Toronto Star" "You don't want it to end. . . . Borkmann's Point is that rarity, a leisurely read that nevertheless keeps you on the edge of your seat. . . . A pleasure." -- "San Francisco Chronicle""The novel's prime asset is the mordant clarity of Nesser's voice. Its understatement is a pleasure in itself, as investigations pause for Van Veeteren to finish his beer, and a poker-faced wit informs the characterization....the novel delivers enough peppery asides on the ageing process and the passage of time to demonstrate a bleakly perceptive intelligence." -- "Times Literary Supplement ""Nesser spends as much time with his characters as with the mystery... creating an absorbing tale with an unexpected ending."--"The Sunday Telegraph" (UK) "Another good Swedish writer emerges, an old hand, garlanded with his country's prizes, but only now translated into English."--"The Times" (UK) "International bestseller Nesser makes his U.S. debut with this classy and rewarding whodunit, which won the Swedish Crime Writers' Academy Prize for Best Novel in 1994...Thompson's smooth translation makes this worthy mystery readily accessible to American readers."--"Publishers Weekly ""No reader of hard-boiled crime fiction should miss the Scandinavians, and Nesser immediately vaults to near-Mankell status. Let's hope Borkmann's Point, which won the Swedish Crime Writers' Best Novel Award for 1994, is only the first of a steady stream of Nesser imports."--"Booklist "(starredreview) Praise for "Borkmann's Point" and Hakan Nesser: "This is definitely one of the better books to be recently published in the crime genre." --"Finanstidningen" (Sweden) "Original, and with a profound underlying humanity." --"Bohuslaningen" (Sweden) "Nesser writes dramatic murder mysteries that rouse the imagination." --"Nordvastra Skanes Tidningar" (Sweden) "Nesser is one of our most famous crime writers -- but so far only in Sweden. This must change, however, because hardly anyone else in the world tells crime stories in such a unique way." --"WDR-Mittagsmagazin" (Germany) "Nesser belongs to today's elite in crime fiction writing. His work is of the highest quality. Hurry to the bookstore!" --"Svenska Dagbladet" (Sweden) "Nesser has a keen grasp of the art of spinning many narrative threads into a shocking resolution. This finesse and control results in perfectly accomplished crime novels." --"Jonkopings-Posten" (Sweden) Praise from Sweden for The Van Veeteren Crime Novels: "There is a new star in the crime-writing galaxy. A stylish and enjoyable novel . . . spiced with an understated sense of humor." --"Sydsvenska Dagbladet" "With Van Veeteren, Nesser has created a character who has the making of a classic." --"Aftenposten" "Nesser has a keen and complete grasp of the art of spinning many threads, pulling them together in a thrilling way and bringing them to a shocking solution. This sense of finesse and control leads to absolutely accomplished crime novels." --J"onkopings-Posten" "From the Hardcover edition."

Hakan Nesser is one of Sweden's most popular crime writers, receiving numerous awards for his novels featuring Inspector Van Veeteren, including the European Crime Fiction Star Award (Ripper Award) 2010/11, the Swedish Crime Writers' Academy Prize (three times) and Scandinavia's Glass Key Award. The Van Veeteren series is published in over 25 countries and has sold over 10 million copies worldwide. Hakan Nesser lives in Gotland with his wife, and spends part of each year in the UK.

Available from Hakan Nesser: Borkmann's Point, The Return, The Mind's Eye, The Inspector and Silence, The Unlucky Lottery

GOR000985360
Borkmann's Point by Hakan Nesser
Hakan Nesser
The Van Veeteren series
Used - Very Good
Hardback
Pan Macmillan
2006-05-05
336
0333989848
9780333989845
Short-listed for CWA International Dagger 2006 (UK)
Book picture is for illustrative purposes only, actual binding, cover or edition may vary.
This is a used book - there is no escaping the fact it has been read by someone else and it will show signs of wear and previous use. Overall we expect it to be in very good condition, but if you are not entirely satisfied please get in touch with us.