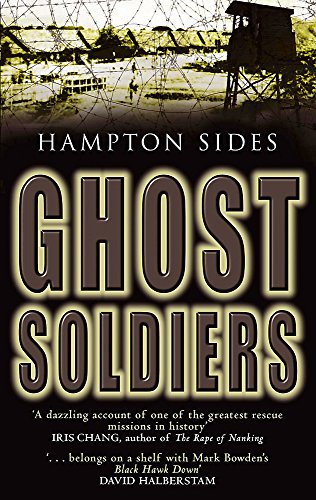 Out of Stock
The rescue of over 500 American POWs from a Japanese camp in the Philippines in 1945 was the largest and most successful operation of its kind. Based on personal accounts from the survivors, this is an epic story now told in full for the first time.
Very Good
Only 0 left

On a parched evening in the Philippines 53 years ago, 511 American POWs were saved from almost certain death. A force of elite US troops from the Sixth Ranger Battalion slipped 30 miles behind enemy lines and marched for three days through jungle and peat swamps. They stormed the camp at dusk, killing over 250 Japanese soldiers, rounded up the dazed prisoners and led them out of the gate. With bullets and mortars whining past, the Rangers hauled the prisoners across the Pampanga river and led them down a network of secret paths, past an 8000-man-strong phalanx of Japanese troops. A guerilla force of a few hundred men ambushed the Japanese, destroying a series of bridges along the river, holding off the enemy long enough for the POWs to escape.
Today, the raid on Cabanatuan remains the largest and most successful operation of its kind ever undertaken by the US army. A mission of mercy, the raid was of immense symbolic importance for the USA in its fight against the Japanese. Dramatic, gripping, horrifying, GHOST SOLDIERS is narrative history at its best.

An enthralling, deeply disturbing look at the horrors of war. It is impossible to read without wondering uneasily how you, the reader, would respond if forced to undergo the monstrous trials described with such immediacy by Hampton Sides * Jon Krakauer, author of INTO THIN AIR *
A dazzling account of one of the greatest rescue missions in history * Iris Chang, author of THE RAPE OF NANKING *
Read the first ten pages of this moving book and you will be hooked by a riveting tale of courage and heroism. In GHOST SOLDIERS Hampton Sides brings to life a forgotten adventure of World War II. * James Bradley, author of FLAGS FOR OUR FATHERS *

Hampton Sides is a correspondent and columnist for Outside, an award-winning monthly magazine based in Santa Fe. His articles have appeared in the New York Times, New Republic and the Washington Post, among others. He lives in Santa Fe with wife Anne, a journalist.

GOR001198253
Ghost Soldiers by Hampton Sides
Hampton Sides
Used - Very Good
Paperback
Little, Brown Book Group
2005-08-18
352
0349117888
9780349117881
N/A
Book picture is for illustrative purposes only, actual binding, cover or edition may vary.
This is a used book - there is no escaping the fact it has been read by someone else and it will show signs of wear and previous use. Overall we expect it to be in very good condition, but if you are not entirely satisfied please get in touch with us.