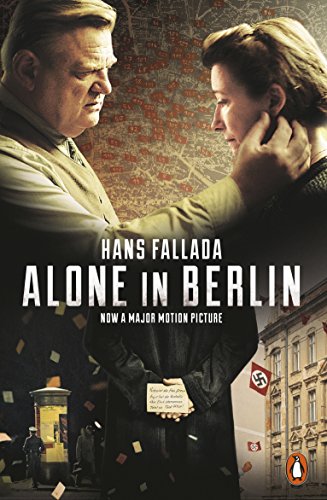 Alone in Berlin
by Hans Fallada

Berlin, 1940, and the city is filled with fear. When unassuming couple Otto and Anna Quangel receive the news that their beloved son has been killed fighting in France, they are shocked out of their quiet existence and begin a silent campaign of defiance. A deadly game of cat and mouse develops between the Quangels and the ambitious Gestapo inspector Escherich in Fallada's desperately tense and heartbreaking exploration of resistance in impossible circumstances.

A page-turning moral thriller, based on fact, of a -working-class German -couple and their small-scale attempts to resist Nazi rule in Berlin. Bleak, chilling, utterly compelling and unforgettable * Daily Mail *
[This novel] suggests that resistance to evil is rarely straightforward, mostly futile, and generally doomed. Yet to the novel's aching, unanswered question: 'Does it matter?' there is in this strange and compelling story to be found a reply in the affirmative. Primo Levi had it right: This is the great novel of German resistance -- Richard Flanagan
A classic study of a paranoid society. Fallada's scope is extraordinary. Alone in Berlin is ... as morally powerful as anything I've ever read * Telegraph *
A rediscovered masterpiece that makes you want to seek out more works by this great chronicler of events in my own lifetime -- Barry Humphries * Sunday Telegraph *
Fallada's great novel, beautifully translated by the poet Michael Hofmann, evokes the daily horror of life under the Third Reich, where the venom of Nazism seeped into the very pores of society, poisoning every aspect of existence. It is a story of resistance, sly humour and hope -- Ben Macintyre * The Times *

Hans Fallada (Author)
Hans Fallada was born in Germany in 1893. His life was checkered by a failed adolescent suicide pact in which his friend died, addiction to morphine and alcohol, periods of incarceration in prison and mental hospitals, and brushes with the Nazi regime. His most famous novels include Little Man, What Now?, The Drinker and Alone in Berlin, written in 24 days. Fallada died weeks before its publication, in February 1947 in Berlin.

Michael Hofmann (Translator)
Michael Hofmann is a translator and the author of several books of poetry and criticism. Penguin publish his translations of Franz Kafka, Hans Fallada, Irmgard Keun and Jakob Wassermann.

GOR008611282
Alone in Berlin: (Film Tie-in) by Hans Fallada
Hans Fallada
Penguin Modern Classics
Used - Very Good
Paperback
Penguin Books Ltd
2016-10-31
592
0241277027
9780241277027
N/A
Book picture is for illustrative purposes only, actual binding, cover or edition may vary.
This is a used book - there is no escaping the fact it has been read by someone else and it will show signs of wear and previous use. Overall we expect it to be in very good condition, but if you are not entirely satisfied please get in touch with us.