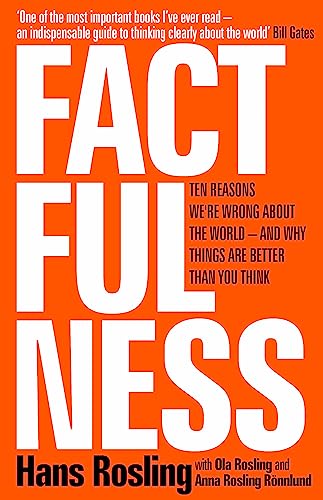 'A hopeful book about the potential for human progress when we work off facts rather than our inherent biases.' BARACK OBAMA

Timely, short and essential, FACTFULNESS reveals the power of facts in a post-truth world, by late international sensation Hans Rosling ('a true inspiration' - Bill Gates) and his long-term collaborators Ola and Anna.

Factfulness: Ten Reasons We're Wrong About The World - And Why Things Are Better Than You Think by Hans Rosling

'A hopeful book about the potential for human progress when we work off facts rather than our inherent biases.' BARACK OBAMA

'One of the most important books I've ever read - an indispensable guide to thinking clearly about the world.' BILL GATES

Factfulness: The stress-reducing habit of only carrying opinions for which you have strong supporting facts.

When asked simple questions about global trends - why the world's population is increasing; how many young women go to school; how many of us live in poverty - we systematically get the answers wrong. So wrong that a chimpanzee choosing answers at random will consistently outguess journalists, Nobel laureates and investment bankers.

In Factfulness, Professor of International Health and a man who can make data sing, Hans Rosling, together with his two long-time collaborators Anna and Ola, offers a radical new explanation of why this happens, and reveals the ten instincts that distort our perspective.

It turns out that the world, for all its imperfections, is in a much better state than we might think. But when we worry about everything all the time instead of embracing a worldview based on facts, we can lose our ability to focus on the things that threaten us most.

Inspiring and revelatory, filled with lively anecdotes and moving stories, Factfulness is an urgent and essential book that will change the way you see the world.

A hopeful book about the potential for human progress when we work off facts rather than our inherent biases. -- Barack Obama
One of the most important books I've ever read-an indispensable guide to thinking clearly about the world. -- Bill Gates
A powerful antidote to pervasive pessimism and populist untruths. -- Andrew Rawnsley * Observer, Book of the Year *
Factfulness ... , a light-hearted but data-rich book, calibrates our view of the world and explains how our cognitive processes can lead us astray -- Steven Pinker * New Statesman, The best books of 2018 *
Wonderful... a passionate and erudite message that is all the more moving because it comes from beyond the grave... His knack for presentation and delight in statistics come across on every page. Who else would choose a chart of "guitars per capita" as a proxy for human progress? * Financial Times *
An immensely cheering book in these anxious times. -- Christina Hardyment * The Times *
An assault both on ignorance and pessimism . . . helping countries improve their governance and public health and opening them up to the rule of law and market exchange works. But not by some sort of magic. Because we act. And to this, as Rosling argues, we first have to understand the world we live in. -- Daniel Finkelstein * The Times *
A wonderful guide to an improving world, as well as being a well-stocked source of sound advice as to how to think about factual and statistical claims . . . The book is a pleasure to read - simple, clear, memorable writing - and when you've finished you'll be a lot wiser about the world. You'll also feel rather happier . . . Factfulness - the relaxing peace of mind you get when you have a clearer view of how the world really is . . . I strongly recommend this book. -- Tim Harford
We need more of this way of thinking, both in business and politics. Where better to start than a new book by one of Gates' favourite gurus, the late Swedish statistician Hans Rosling . . . in an age of so-called post-truth, this is a celebration of the all too often repudiated but underlying story of relentless human progress. -- Jeremy Warner * Sunday Telegraph *
[Bill] Gates had selected the tomes as his favourite summer reads . . . [which included] feel-good non-fiction . . . celebrating technological progress and genius, such as Hans Rosling's Factfulness. -- Gillian Tett * FT Magazine *
Hans Rosling tells the story of "the secret silent miracle of human progress" as only he can. But Factfulness does much more than that. It also explains why progress is so often secret and silent and teaches readers how to see it clearly. -- Melinda Gates
Three minutes with Hans Rosling will change your mind about the world. -- Amy Maxmen * Nature *
Thoroughly researched and clearly written . . . this is a measured, objective, and ultimately optimistic account of where we are and how we got here. * Independent *
Factfulness has the power to shift your entire perspective. If you want to understand the world, read it now! -- Rolf Dobelli
Triumphant. * Sunday Times *
Bestselling books about statistics are as rare as unicorns. One that gets to No.1 is as rare as a lunar unicorn. Factfulness by Hans Rosling is that moon-based creature . . . engaging. * The Times *
Factfulness is a fabulous read, succinct and lively. It asks why so many people - including Nobel laureates and medical researchers - get the numbers so wrong on pressing issues such as poverty, pandemics and climate change... a just tribute to this book and the man would be a global day of celebration for facts about our world. -- Jim O'Neill * Nature *
Rosling's final work is about the misconceptions most people hold about the world we live in - it's better than we think - and a plea to think critically. -- Robert Muchamore * Metro *
An unexpectedly uplifting read. * Emerald Street *
The message is refreshingly clear: when you only hold opinions about things you know the facts about, you can see the world more clearly. * Mr Hyde *
I had very high expectations; the book exceeded them. Superb guide to the world and how to be wiser about it. Great storytelling. An inspiration. -- Tim Harford
An insistently hopeful, fact-based booster shot for a doomsaying, world-weary population [which] parts the dingy curtains of global pessimism to reveal an alternate and uplifting perspective on the state of world issues today. Co-written with Rosling's son and daughter-in-law, the book effectively educates, uplifts, and reassures readers. . . In compelling readers to comprehend the positive aspects of world changes using practical thinking tools, Rosling delivers a sunny global prognosis with a sigh of relief. - Kirkus
[An] accessible, smart-thinking read which reveals the preconceptions that make us misunderstand the way the world works -- Caroline Sanderson * Daily Mirror *
[A] smart read -- Books for the Beach * Sunday Express *
It was such a hopeful book - it's about why society is better off than we think and how many of the problems we think exist, don't -- Talita von Furstenberg * Vogue *

Hans Rosling was a medical doctor, professor of international health and renowned public educator. He was an adviser to the World Health Organization and UNICEF, and co-founded Medecins sans Frontieres in Sweden and the Gapminder Foundation. His TED talks have been viewed more than 35 million times, and he was listed as one of Time Magazine's 100 most influential people in the world. Hans died in 2017, having devoted the last years of his life to writing this book.

Ola Rosling and Anna Rosling Roennlund, Hans's son and daughter-in-law, were co-founders of the Gapminder Foundation, and Ola its director from 2005 to 2007 and from 2010 to the present day. After Google acquired the bubble-chart tool called Trendalyzer, invented and designed by Anna and Ola, Ola became head of Google's Public Data Team and Anna the team's senior user experience (UX) designer. They have both received international awards for their work.

GOR008971274
Factfulness: Ten Reasons We're Wrong About The World - And Why Things Are Better Than You Think by Hans Rosling
Hans Rosling
Used - Very Good
Hardback
Hodder & Stoughton
2018-04-03
352
1473637465
9781473637467
N/A
Book picture is for illustrative purposes only, actual binding, cover or edition may vary.
This is a used book - there is no escaping the fact it has been read by someone else and it will show signs of wear and previous use. Overall we expect it to be in very good condition, but if you are not entirely satisfied please get in touch with us.