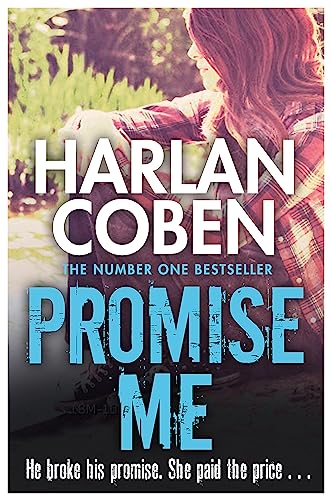 Promise Me
by Harlan Coben

Used Price
£4.49
New RRP £8.99
Free Shipping in the UK
It began with a phone call... Has he now made a promise he can't keep? A gripping Myron Bolitar novel from the SUNDAY TIMES bestselling author of SIX YEARS.
Reviews:
Trustpilot
Very Good Good

Promise Me by Harlan Coben

It began with a phone call... Has he now made a promise he can't keep? A gripping Myron Bolitar novel from the SUNDAY TIMES bestselling author of SIX YEARS.

The 2am phone call is from a young, frightened, lost girl who has called the one adult who had promised to help her if she ever got into any trouble: Myron Bolitar. But his help proves not to be enough. He picks her up from a cold street corner and - against his better judgment - is persuaded to drop her at an unknown address. This is a mistake that he lives to regret, for Aimee Biel's final wave from a darkened porch turns out to be the last time anyone will see her...

Driven by guilt and the desperation of her family, Myron decides to break his vow of six years and get involved in the search. But his past will not be buried so easily ... and Myron must decide once and for all what he will stand up for if he is to have any hope of rescuing both Aimee and himself.

Rejoice. After a temporary absence, Myron Bolitar is back. Coben proves yet again that mean, twisted minds inhabit the deceptively squeaky-clean suburbs of New Jersey * TIME OUT *
Bolitar is a glorious character, full of the right kind of quips and wise-ass backchat. Coben's thrillers always have a dramatic twist at the end, sometimes even two or three, and this does not disappoint on that score. * GUARDIAN *
Coben fans won't be disappointed by the trademark serpentine twists * DAILY MAIL *
I liked Myron Bolitar, the laidback hero of many of his books - but I never really got to know Myron properly until this latest book. This is the humanization of Myron Bolitar. Just 12 pages from the end of the book I still had no idea about how it was going to be resolved. There are lovely light-hearted lessons in life sprinkled throughout but PROMISE ME is not about preaching, it is about catching you by those short hairs on the back of your neck -- Maeve Binchy * SUNDAY TIMES *

GOR006020246
Promise Me by Harlan Coben
Harlan Coben
Used - Very Good
Paperback
Orion Publishing Co
2014-02-25
480
140915050X
9781409150503
N/A
Book picture is for illustrative purposes only, actual binding, cover or edition may vary.
This is a used book - there is no escaping the fact it has been read by someone else and it will show signs of wear and previous use. Overall we expect it to be in very good condition, but if you are not entirely satisfied please get in touch with us.