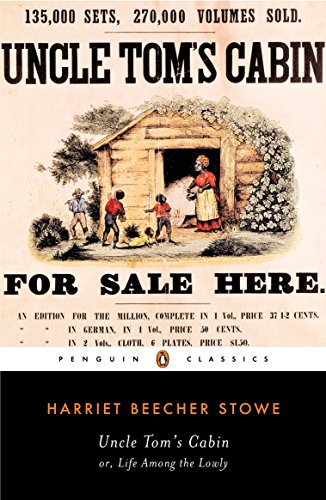 Describing the many trials and eventual escape to freedom of the long-suffering, good-hearted slave Uncle Tom, this novel intends to show how Christian love can overcome any human cruelty.

Uncle Tom's Cabin: Or, Life Among the Lowly by Harriet Beecher Stowe

Published in 1852, Harriet Beecher Stowe's novel was a powerful indictment of slavery in America. Describing the many trials and eventual escape to freedom of the long-suffering, good-hearted slave Uncle Tom, it aimed to show how Christian love can overcome any human cruelty. Uncle Tom's Cabin has remained controversial to this day, seen as either a vital milestone in the anti-slavery cause or as a patronising stereotype of African-Americans, yet it played a crucial role in the eventual abolition of slavery and remains one of the most important American novels ever written.
"Uncle Tom's Cabin is the most powerful and enduring work of art ever written about American slavery."
--Alfred Kazin
Harriet Beecher Stowe (1811-1896) was born in Litchfield, Connecticut, daughter of the Reverend Lyman Beecher of the local Congregational Church. In 1832, the family moved to Cincinnati, where Harriet married Calvin Ellis Stowe, a professor at the seminary, in 1836. The border town of Cincinnati was alive with abolitionist conflict and there Mrs. Stowe took an active part in community life. She came into contact with fugitive slaves, and learned from friends and from personal visits what life was like for the Negro in the South. In 1850, the Fugitive Slave Law was passed, and that same year Harriet's sister-in-law urged the author to put her feelings about the evils of slavery into words. Uncle Tom's Cabin was first published serially during 1851-52 in The National Era, and in book form in 1852. In one year more than 300,000 copies of the novel were sold. Mrs. Stowe continued to write, publishing eleven other novels and numerous articles before her death at the age of eighty-five in Hartford, Connecticut.

Ann Douglas teaches English at Columbia University. Her books include Terrible Honesty: Mongrel Manhattan in the 1920s and The Feminization of American Culture.

GOR001527183
9780140390032
0140390030
Uncle Tom's Cabin: Or, Life Among the Lowly by Harriet Beecher Stowe
Harriet Beecher Stowe
Used - Very Good
Paperback
Penguin Books Ltd
1981-09-17
640
N/A
Book picture is for illustrative purposes only, actual binding, cover or edition may vary.
This is a used book - there is no escaping the fact it has been read by someone else and it will show signs of wear and previous use. Overall we expect it to be in very good condition, but if you are not entirely satisfied please get in touch with us
Trustpilot