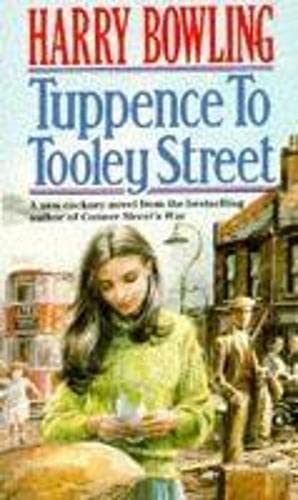 In Stock
£2.99
A stunning depiction of a man struggling to regain his place in life - an experience shared by many who survive the horrors of war.
Very Good
10 in stock

Tuppence to Tooley Street: Nothing can stay the same forever... by Harry Bowling

As he lay in the mud on the beach at Dunkirk, Danny Sutton didn't think he would ever see his home in London's docklands again. But he was one of the lucky ones.

Returning home, he is reassured to find that things are just the same: the smell of the wharves and warehouses in Tooley Street; the usual hubbub in Dawson Street, where aproned figures stand in doorways discussing the war; the men down The Globe; the children playing tin-can copper in the gutters. And at number 26, Danny's family crowd round to welcome their beloved son home. But, scarred in mind as well as body, Danny is to realise that things have changed.

Unable to do heavy work because of his war wounds he must adjust to a different way of life. And, worst of all, his childhood sweetheart, Kathy, didn't wait for him ...

Harry was born in 1931 in a back street off the Tower Bridge Road. Only when his own children began to ask questions about the war, did Harry realise how many stories he had to tell. He became known as 'the King of Cockney sagas', and he wrote eighteen bestselling novels of London life. After Harry died in 1999, the Harry Bowling Prize was set up in his memory.

GOR004090449
Tuppence to Tooley Street: Nothing can stay the same forever... by Harry Bowling
Harry Bowling
Used - Very Good
Paperback
Headline Publishing Group
1989-01-12
304
074723194X
9780747231943
N/A
Book picture is for illustrative purposes only, actual binding, cover or edition may vary.
This is a used book - there is no escaping the fact it has been read by someone else and it will show signs of wear and previous use. Overall we expect it to be in very good condition, but if you are not entirely satisfied please get in touch with us.