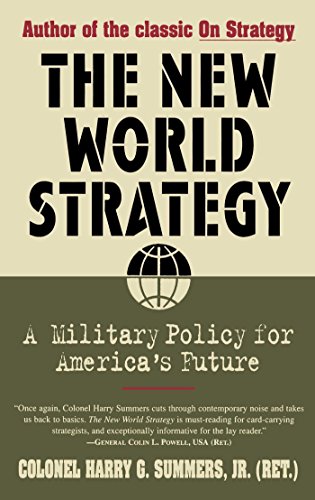 In Stock
£16.99
Drawing from classic works on strategic thinking and his own intimate knowledge of today's military, Summers offers a trenchant analysis of American foreign policy and the role of the military--including an urgent warning about the current state of affairs and recommendations for future policies.
Good
Only 1 left

"In this collection of essays, Colonel Summers brings to the disorder and confusion of the post-Cold War world his usual common sense and many keen insights....[He] is particularly impressive in examining the (uniquely) American way of war -- and in analyzing the dagers to our democracy in times, such as these, in which we appear adrift."
-- James Schlesinger, Former Secretary of Defense and Director of the CIA

Newt Gingrich Speaker of the House of Representatives I was impressed by Colonel Summers's On Strategy when it first came out, and I'm looking forward to The New World Strategy and its insights into military policies for the future.
Mackubin Thomas Owens, Jr. Editor-in-Chief, Strategic Review The New World Strategy is an excellent guide to policy and strategy in the "new world disorder."
Representative Ike Skelton Committee on National Security The New World Strategy...gives us a crystal-ball view as to what our strategy, goals, and limitations are under our American constitutional form of government.