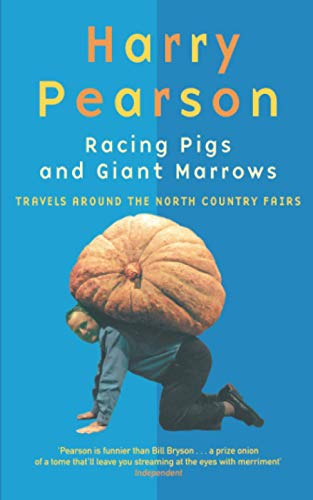 In Stock
£14.99
* In Harry's second book he introduces us to the novelties which abound in our North Country Fairs, from fell Running to Rabbit Fancying.
Very Good
8 in stock

Following his acclaimed book about football in the north-east,THE FAR CORNER, Harry Pearson vowed that his next project would not involve hanging around outdoors on days so cold that itinerant dogs had to be detached from lamp-posts by firemen. It would be about the summer: specifically, about a summer of shows and fairs in the north of England.

Encompassing such diverse talents as fell-running, tupperware-boxing and rabbit fancying (literally), and containing many more jokes about goats than is legal in the Isle of Man, Racing Pigs and Giant Marrows is without doubt the only book in existence to explain the design faults of earwigs and expose English farmers' fondness for transvestism. Warm, wise and very funny, it confirms increasing suspicions that Harry Pearson is really quite good.

Pearson is funnier than Bill Bryson . . . a prize onion of a tome that'll leave you streaming at the eyes with merriment * INDEPENDENT *
Just as much of a hoot [as THE FAR CORNER]. The title explains his remit, but can't do justice to his one-liners and digressions * MANCHESTER EVENING NEWS *
It would have been easy for Pearson to have got hold of these people by their prize-winning parts and pulled mercilessly. But being a Northerner himself, he understands and revers them and takes the trouble to set these shows and their bizarre sideshows in a revealing historical context. He has fun doing it and it shows... In his sharp observation of British habit, Pearson has been compared with Bryson; in his capturing of the overheard, he has been linked with Bennett. In fact, Pearson is a new and original voice and all the more welcome for it * THE TIMES *
One of the most impressive aspects of this highly genial book is a knowledge of rural history that enables [Pearson] to extemporise on subjects as diverse as the Bluefaced Leicester (it's a sheep) * FHM *

Harry Pearson is a journalist and writer who contributes regularly to the GUARDIAN, WHEN SATURDAY COMES and a number of those men's magazines with women in bras on the cover. His first book, THE FAR CORNER, was runner up for the William Hill Sports Book of the Year.

GOR000954997
Racing Pigs And Giant Marrows: Travels around the North Country Fairs by Harry Pearson
Harry Pearson
Used - Very Good
Paperback
Little, Brown Book Group
1997-09-04
240
034910946X
9780349109466
N/A
Book picture is for illustrative purposes only, actual binding, cover or edition may vary.
This is a used book - there is no escaping the fact it has been read by someone else and it will show signs of wear and previous use. Overall we expect it to be in very good condition, but if you are not entirely satisfied please get in touch with us.