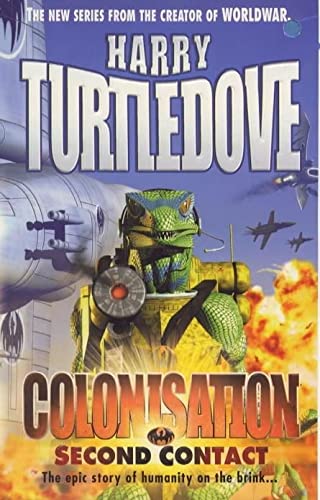 In Stock
£7.49
Halfway through World War II aliens invaded Earth. They were repelled - but now, years later they are back . . . This is the first volume in the three-part Colonisation series, which follows the Worldwar trilogy. The whole sequence will conclude with Homeward Bound.
Very Good Good Well Read
Only 4 left

Through a mixture of guts, ingenuity and sheer luck, Earth managed to defend herself from her ruthless alien would-be conquerors. The 'Race' was fought to a bloody standstill despite its awe-inspiring weaponry and experience of merciless conquest. Thousands died from enemy fire, many more from the smouldering nuclear-scarred fall-out sites. An uneasy ceasefire reigns over this divided globe, as both sides strive to test their strength through more subtle techniques.
But now, years later, this delicate equilibrium has been shattered. For the first assault was only an advance. guard. Now, a whole new fleet orbits the planet.
The real colonists have arrived, fresh and unwill to accept old compromises.

'The wizard of If.' Chicago Sun-Times
'Turtledove the standard bearer for alternate history.' USA Today

"An exciting, often surprising, story that will not only delight his fans but will probably send newcomers back to the WORLDWAR saga"
Publishers Weekly (starred review)

Good fun. It has an authentic speculative quality, energy and dash. * Time Out on A WORLD OF DIFFERENCE *
Engrossing ... definitely the work of one of alternate history's authentic modern masters . . . totally fascinating. * Booklist on THE GREAT WAR series *

GOR001154943
Colonisation: Second Contact by Harry Turtledove
Harry Turtledove
Used - Very Good
Paperback
Hodder & Stoughton General Division
2000-01-20
704
0340751444
9780340751442
N/A
Book picture is for illustrative purposes only, actual binding, cover or edition may vary.
This is a used book - there is no escaping the fact it has been read by someone else and it will show signs of wear and previous use. Overall we expect it to be in very good condition, but if you are not entirely satisfied please get in touch with us.