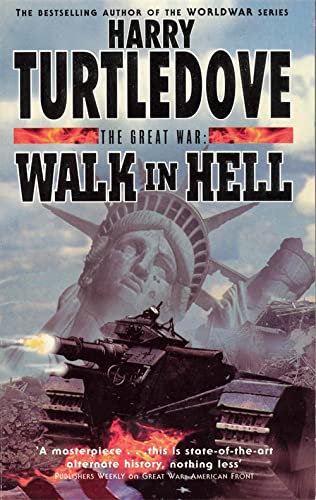 The Great War: Walk in Hell
by Harry Turtledove

This is second part of the Great War trilogy (after American Front) and the 4th volume in Harry Turtledove's epic alternative history of the USA, in which the South is victorious in the American Civil War. It began with The Guns of the South, continues How Few Remain and goes on in Turtledove's American Empire and Settling Accounts sequences.

The Great War: Walk in Hell by Harry Turtledove

It's 1915, the Great War is intensifying, and the time of darkness has come. The slaves of the south have risen against their masters, taken on the creed of Bolshevism and are attacking the Confederacy from within. But the United States remains pinned between their weakened southern rival, and their other bitter enemy, Canada. But both Presidents - Theodore Roosevelt of the Union and staunch Confederate Woodrow Wilson - are stubbornly determined to lead their nations to victory, at any cost.
Meanwhile the new and poisonous weapons of tanks, gas and planes are starting to make their presence felt at the front. It's total war for the first time in human history and it's ordinary people on both sides who are the ones to begin suffer...

GOR001211299
The Great War: Walk in Hell by Harry Turtledove
Harry Turtledove
Used - Good
Paperback
Hodder & Stoughton General Division
2000-04-20
704
0340715480
9780340715482
N/A
Book picture is for illustrative purposes only, actual binding, cover or edition may vary.
The book has been read but remains in clean condition. All pages are intact and the cover is intact. Some minor wear to the spine.