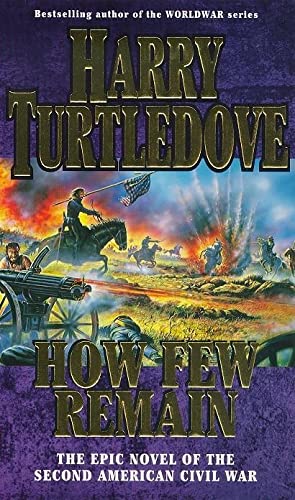 How Few Remain
by Harry Turtledove

This is the second volume in Harry Turtledove's epic alternative history of the USA, in which the South is victorious in the American Civil War. The story began with The Guns of the South, continues in this volume and goes on in Turtledove's three great sequences: The Great War, American Empire and Settling Accounts.

How Few Remain by Harry Turtledove

A generation after the South won the first American civil War, America writhes once more in the bloody throes of battle. Furious over the annexation of key Mexican territory, the United States declares total war against the Confederate States. And so, in 1881, the frgile peace is shattered.
But this is a new kind of war, fought on a lawless frontier where the Blue and the Grey battle not only each other but the Apache, the outlaw - and evne the British Redcoat. For along with France, britain enters the fray on the Confederate side.

GOR001197702
How Few Remain by Harry Turtledove
Harry Turtledove
Used - Very Good
Paperback
Hodder & Stoughton General Division
1998-07-16
480
0340715413
9780340715413
N/A
Book picture is for illustrative purposes only, actual binding, cover or edition may vary.
This is a used book - there is no escaping the fact it has been read by someone else and it will show signs of wear and previous use. Overall we expect it to be in very good condition, but if you are not entirely satisfied please get in touch with us.